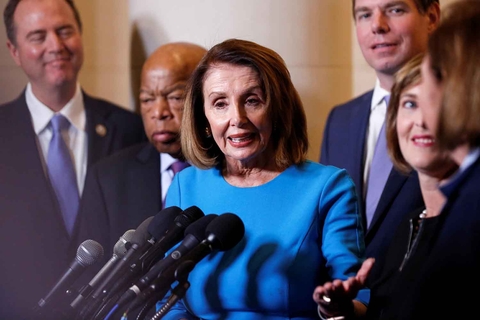 Donald Trump may not realize it totally yet, but yesterday was the last easy-ish day of his presidency.

By noon (or so) Thursday, Nancy Pelosi became the new speaker of the House of Representatives -- formalizing the Democratic majority her side won in last November's election. And that will change everything.

Trump has sought to look on the bright side of divided control of government to date -- insisting that maybe he will be able to make deals with the new Democratic majority in the House. "It really could be a beautiful bipartisan situation," he said at a press conference the day after the 2018 election.

But the early returns are not promising. The federal government has been shut down for the past 12 days -- and there's little reason to believe that will change at any point soon. Trump has dug in on his demand for $5 billion to fund construction of his border wall. Pelosi and Senate Minority Leader Chuck Schumer, of New York, are equally dead-set on providing zero dollars for Trump's wall.

And this is only the beginning. Starting today, Democrats in the House will make Trump's life a living hell. Efforts are already underway to bring a number of his Cabinet officials before Congress, to extricate his tax returns from his grip and to more deeply probe his business dealings both before and during his presidency.

Trump, a political neophyte prior to the 2016 race, has never had to deal with this sort of opposition before. Sure, Democrats have never been willing to give him the benefit of the doubt. But he never really needed Democrats to do much of anything, either. The Republican majorities in the House and Senate ensured Trump got his tax cuts and two Supreme Court picks. There was no real political penalty for his total unwillingness and inability to work with Democrats.

Those days are now over. Democrats can now do Trump real political damage using the official means of their House majority. While they may not be able to, say, force his tax returns into public view (the jury remains out on that), they can make sure the issue is front and center and create major distractions for a White House that has already shown it can distract itself very well, thank you very much.

Trump claims to understand this, likely with his self-professed titanic intellect. To me, that's like when people who are about to have a baby say they are totally ready for it. As evidence, they point to their nursery being all set up, the Diaper Genie being up and running, and so on and so forth. Then the baby comes -- and they realize, like every parent that has gone before them, that no amount of planning or bracing could fully prepare them for their new reality.

The Point: Look out: It's going to be a mess.