A tribute to Charlie Morgan 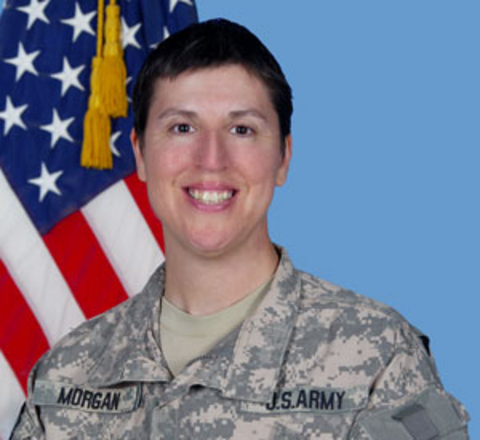 Pictured above is Charlie Morgan in her official National Guard photo prior to her illness.

(New Hampshire - AP) Today we pay tribute to Charlie Morgan, a chief warrant officer in the New Hampshire National Guard and a champion of civil rights for gay and lesbian Americans.

Morgan died recently after a lengthy battle with breast cancer, leaving behind her wife, Karen, and 5-year-old daughter, Casey Alana.

Morgan become a public face in the fight for equal rights for gay and lesbian service members the day the military ended its "don't ask, don't tell" (DADT) policy, when she said on national television, "I'm finally proud to announce that I'm a lesbian."

In her final years, she fought to gain equal treatment under federal law for gay and lesbian military families, and she is a plaintiff in a lawsuit to overturn the federal Defense of Marriage Act, which discriminates against same-sex couples by denying benefits, including survivor benefits, and so many other legal safeguards.

There are no exceptions to the Declaration of Independence's historic proclamation "that all men are created equal, that they are endowed by their Creator with certain unalienable Rights, that among these are Life, Liberty and the pursuit of Happiness," and we will carry Charlie Morgan's memories in our hearts as we continue to fight on until gay and lesbian men and women enjoy full equality under the law.

Sometimes in the heat of battle, it's hard to see history in the making.

Many battles have been won the past few years in the fight for full legal equality for gay and lesbian Americans. With nine states now legally recognizing same-sex marriage, momentum is definitely on the side of marriage equality.

When we think of the epic struggles for civil rights, we tend to focus on high-profile leaders; in the fight for the civil rights of African Americans, for example, we instantly think of Martin Luther King Jr. But we know that one person alone does not change the history of the world. Along with that brave leader are thousands of courageous men and women who literally and symbolically link arms and fight, at great personal sacrifice and peril, against what often seem like impossible odds. They are the unsung heroes who bend the arc of history. Charlie Morgan's efforts were real and meaningful and made a difference.

But even if the courts do not rule against DOMA, the popular tide is turning.

During his State of the Union address, President Obama endorsed full equality without any conditions. "We will ensure equal treatment for all service members, and equal benefits for their families — gay and straight," the president said.

And on Monday, while expanding some benefits to same-sex couples, outgoing Secretary of Defense Leon Panetta said, "I foresee a time when the law will allow the department to grant full benefits to service members and their dependents, irrespective of sexual orientation."

When that does happen, we should all give thanks to Charlie Morgan.

The United States will end federal discrimination against same-sex couples in the courts or in Congress because it is the right thing to do. We know in our hearts that service members who risk their lives to defend our nation deserve our full gratitude and respect — without reservation — and we can show that gratitude and respect by giving them and their families equal protection under the law.