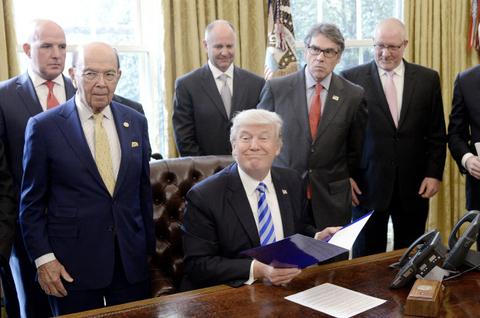 President Donald Trump and members of his administration. Photo by Getty Images.

The Trump administration is planning to shift more than $260 million to cover the rising cost and strain of housing thousands of undocumented immigrant children in their custody -- including millions of dollars from programs like cancer research and HIV/AIDS prevention.

The request comes as the program has been strained by record-high levels of children in custody, driven in large part by new policies that are holding kids longer and making it more difficult for them to be released to adults, such as family members.

It also comes amid news that the Department of Health and Human Services once again could not locate 1,500 children it had released over a three-month period.

There are more than 13,000 children currently in HHS custody, spokeswoman Evelyn Stauffer told CNN. The number fluctuates daily, but that is higher than the record-setting 12,800 in custody last week.

The program request is detailed in a letter to Sen. Patty Murray, D-Washington, and other lawmakers from HHS Secretary Alex Azar dated September 5, which was obtained by CNN.

In the letter, Azar said his agency is reallocating up to $186 million from other pots of HHS money and up to $80 million from refugee programs that are being little used as the administration slashes the yearly number of refugees admitted to the country.

The Department of Homeland Security similarly reprogrammed more than $200 million to cover immigrant detention this month, including $10 million from the Federal Emergency Management Agency.

The letter was first reported by Yahoo News.

The program that houses immigrant children who came to the US alone or were separated from an adult at the border has regularly needed additional funding in past years, requiring that it be allocated from other parts of the department's budget.

In a statement, HHS said these types of reprogramming requests are routine and have occurred for the the immigrant children program in previous years going back to 2012. Similar transfers of money are also used in times of need, like with the Zika concerns in 2016.

"HHS is utilizing the Secretary's transfer and reprogramming authorities to provide additional funds for the care of unaccompanied alien children," said HHS Deputy Secretary Eric Hargan. "The funding will now likewise be used for increases in caseloads and unexpected surges in children needing care from our program. Unfortunately, the need for additional funds has grown since FY 2011, due to the continual increase of unaccompanied alien children at the border. These transfers are only a temporary solution to the sad consequence of a broken immigration system."

HHS said that so far, the only reallocation that has happened in 2018 was $17 million in the Ryan White HIV/AIDS program that supports HIV/AIDS treatment for those who struggle to afford it.

Federal agencies are allowed to shift funds as long as they are not taking more than 1% from a given pot of money or increasing another pot of money more than 3%. Those types of requests must be sent to the relevant congressional subcommittees and approved by those committees' chairmen.

With Republicans in control of both chambers of Congress, those chairmen are Republicans. Democrats do not need to sign off.