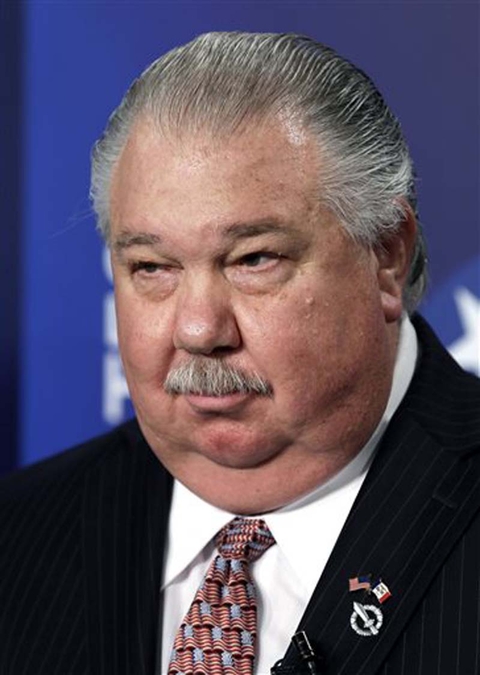 Not only is Trump’s nominee for Director of the United States Department of Agriculture (USDA) not a scientist, he’s also widely known as being anti-gay.

Nominee Sam Clovis holds an MBA from Golden Gate University and a Ph.D. in public administration from the University of Alabama. No science background and, according to our research, has never had a job in agriculture. He has a background in the military, was a professor of economics and was a far right-wing talk show radio host.

“He’s [Trump] hired a bunch of people who had no background in their appointments,” said Stan Barta, an Oklahoma rancher.  "Look at Tillerson, he had no background. Neither did Sessions. I just don’t understand it’s like he’s placing people that don’t make any sense.”

However, the rancher said he thinks the food supply in the U.S. currently is very safe.

“I would be concerned if they started sending chickens to china,” he added. “I’d be concerned what we might get back. Our milk and beef in the US – as long as it’s US raised and US butchered – are some of the safest foods in our market today.

“If there is one cow with antibiotics in it, it will contaminate all the milk it is mixed with. The beef can’t be sold for many days after receiving the antibiotics."

However, that’s under the current USDA guidelines. Barta said it would depend on what regulations may change as to how safe the food supply would remain.

Barta has been a rancher nearly all his life. He currently ranches out of Payne and Lincoln counties.

In addition to not having adequate training and qualifications for the position to which Clovis has been nominated, he also claims to know a lot about the gay community.

According to GLADD, Clovis:

-- Told rabidly anti-LGBTQ radio host Bryan Fischer that “the progressive movement is trying to redefine marriage because if they can breakdown the establishment of marriage, then they have broken down the first and essential building block of society, and this is exactly what the purpose is and why they’re advancing this agenda.”

-- Said he would vote against ENDA, a measure guaranteeing fair employment practices for LGBTQ people, because he doesn’t believe in protections “based on a choice of behavior---and even if it’s a genetic factor, there’s not enough of them to turn the constitution on its head.”

-- Argued that the Supreme Court’s 2013 DOMA ruling opens the door to polyamorous marriages; also called the ruling “another step in the wrong direction for the social and physiological strength of our nation.”

-- Joined an anti-LGBTQ coalition, including the National Organization for Marriage and the Family Leader, on a campaign to oust the Iowa Supreme Court justices who voted for marriage equality.

-- Said: “One of the four pillars of American strength is the traditional, nuclear family. That family begins with one man and one woman brought together in holy matrimony and from this union should come the children that fill out the family unit. This model works and clearly provides the strongest economic, social and psychological base for this most important building block of society.”

-- Claimed: “The LGBT community is using marriage as a wedge issue, but the ultimate goal is to gain 14th Amendment protections for LGBT individuals, which are 4 percent of the population. People often times do not see the connection here because what happens is if you are able to change the definition of marriage, you’ve accomplished a great number of things. One is the further driving of a wedge between a God and a state recognized institution...

“The real issue is, imagine the arrogance of a group of people saying they want to change the definition of something and that’s it. There are no intellectual underpinnings for that. To say we now have marriages between two consenting adults is a fallacious argument because what happens is you want to define marriage from one man to one woman to consenting adults. What’s to say you can’t pass that on to other things? They want to deconstruct the fundamental institution of this country — the family. That is the reason for this.” Continues: “...this whole issue is the absolute elimination of religious influence on this nation. Essentially it’s the last brick to be pulled out of the wall and then they’ll have taken the wall down.”

Clovis was born in The Gayly region and raised in the same area. He was raised and grew up in Medora, Kansas, about an hour NE of Wichita. After time in the service, he moved to Iowa.

When President Trump took office in January 2017, Clovis was given a temporary role as senior White House adviser to the USDA “until a permanent USDA director would be approved.”

Trump has made his nomination. The rest is left to Congress.