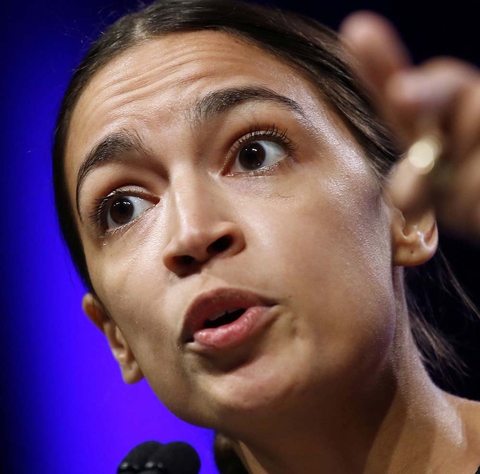 Asked on the South Lawn during an event on American-made products if his tweets were racist, he said: "Not at all."

He pointed to comments that one of the congresswomen made about Al Qaeda -- but didn't say who.

Trump did not name who he was attacking in Sunday's tirade but earlier this week he referenced New York Rep. Alexandria Ocasio-Cortez when the President was defending House Speaker Nancy Pelosi.

Asked Monday who he's talking about, Trump said: "You can guess."

A group of Democrats, who are women of color and have been outspoken about Trump's immigration policies, last week condemned the conditions of border detention facilities. The group of women joining Ocasio-Cortez were Rashida Tlaib of Michigan, Ilhan Omar of Minnesota and Ayanna Pressley of Massachusetts.

Ocasio-Cortez, Tlaib and Pressley are natural-born US citizens, while Omar was born in Somalia and immigrated to the US when she was young. Omar became a citizen in 2000 when she was 17 years old, according to The New York Times.

Trump implied in the series of tweets that the congresswomen weren't born in America and sarcastically suggested, "they go back and help fix the totally broken and crime infested places from which they came."

Later Monday, Trump added if that if the congresswomen don't like the United States they can leave.

"As far as I'm concerned, if you hate our country, if you're not happy here, you can leave," Trump said in remarks in front of the South Portico at an event designed to honor American manufacturing.

"If you're not happy in the US, if you're complaining all the time, you can leave. You can leave right now," Trump said.

Asked about white nationalists who have come out in support of Trump's tweet, Trump said he was unconcerned.

"It doesn't concern me because many people agree with me," he said.

Eventually Trump singled out some of the Democratic lawmakers he attacked, claiming one "hates Jews" and another cost New York tens of thousands of jobs.

He named only one -- Omar -- but referenced Ocasio-Cortez's opposition to a new Amazon headquarters in New York.

It was the President's idea to address his attacks during his "Made in America" event at the White House, a White House official told CNN. Trump told aides he was going to do so before he exited the Oval Office.