Trump: something he 'hadn't thought of' is mentioning indicted Russians 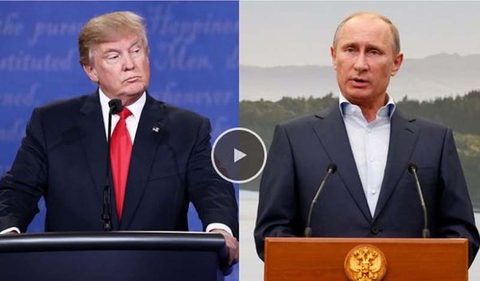 President Donald Trump says he will speak with Russian President Vladimir Putin about extraditing the 12 Russian military intelligence agents indicted by special counsel Robert Mueller on Friday for meddling in the 2016 election, adding it's something he "hadn't thought of."

Asked whether he would raise the issue with Putin during their highly anticipated summit on Monday, Trump said in a Saturday interview with CBS News, "Well, I might. I hadn't thought of that, but certainly I'll be asking about it."

The President then placed blame on Democrats for "allowing" the data and security breaches that led to Russia's tampering in the election, saying the Democratic National Committee was ill-equipped to handle a cyberattack from a foreign actor. The Republican National Committee, on the other hand, had "much better defenses," Trump claimed.

"They were doing whatever it was during the Obama administration," Trump said of the Russians. "And I heard that they were trying, or people were trying, to hack into the RNC too, the Republican National Committee, but we had much better defenses. I've been told that by a number of people, we had much better defenses so they couldn't. I think the DNC should be ashamed of themselves for allowing themselves to be hacked. They had bad defenses, and they were able to be hacked, but I heard they were trying to hack the Republicans too, but, and this may be wrong, but they had much stronger defenses."

Trump will meet with Putin in Helsinki, Finland, despite calls from Democratic lawmakers to cancel the summit in light of Friday's indictments. Republican Sen. John McCain has also said Trump should not meet with Putin unless he holds the Russian president accountable.

Trump told CBS News that he is going into the meeting with Putin with "low expectations," but repeated that he thinks it's "a good thing to meet."

"I do believe in meetings," Trump said. "Look, I believe that having a meeting with Chairman Kim was a good thing. I think having meetings with the President of China was a very good thing, I believe it's really good. And so having meetings with Russia, China, North Korea, I believe in it. Nothing bad's going to come out of it, and maybe some good will come out. But I go in with low expectations, I'm not going in with high expectations. I don't, I don't really, I can't tell you what's going to happen, but I can tell you what I'll be asking for and we'll see if something comes of it."