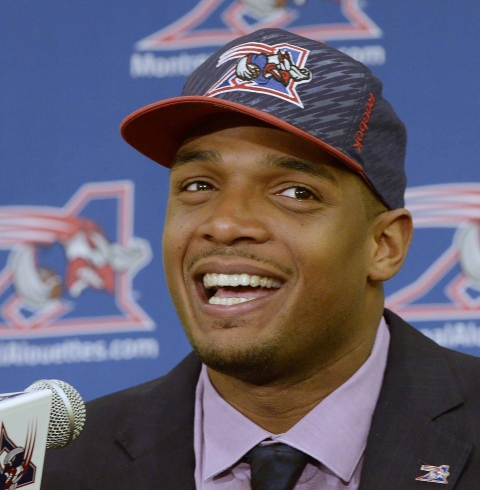 In 2014, Michael Sam was the first openly gay player chosen by an NFL team. AP photo by Ryan Remiorz/Canadian Press.

MONTREAL (AP) — Michael Sam is ready to resume his pro football career. The Alouettes said Friday that Sam has returned to Montreal and is expected to attend team meetings Sunday before resuming practice Monday.

The openly gay defensive lineman left the Canadian Football League team during training camp without explanation, and the Alouettes placed him on their suspended list after his departure. The 25-year-old former Missouri star signed with Montreal in May.

According to follow-up reports, the rookie defensive end was given special permission to return home to Texas after he left the Alouettes training camp for personal reasons. He has now returned to play with the Alouettes.

Sam was selected in the seventh round of the 2014 NFL draft by the St. Louis Rams, becoming the first openly gay player chosen by an NFL team. He was later cut by the Rams and from the Dallas Cowboys' practice squad.

At Missouri, Sam earned SEC Defensive Player of the Year honors in 2013 before turning pro.

Montreal opened the season Thursday night with a 20-16 home loss to the Ottawa Redblacks.