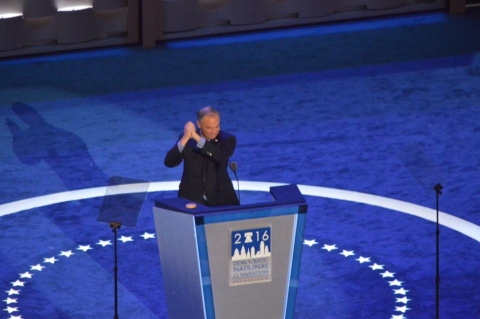 Tim Kaine’s son left for deployment only three days before his nomination acceptance speech at the Democratic National Convention this Wednesday. He began his speech by thanking his family and lamenting his son’s absence.

He humbly accepted the Democratic Party’s nomination for Vice President of the 2016 presidential race.

“I never expected to be here,” he said, mentioning his formative years in Kansas City.

Kaine said he knew he wanted to battle for social justice since high school, right before he took a year off to do missionary work in Honduras.

Kaine proceeded to speak Spanish to a cheering crowd. 13 percent of the U.S. speaks Spanish as a first language, which is a major pool of potential voters in the national audience. Kaine’s appeal to Spanish speaking voters was a stark difference in comparison to the rhetoric of Donald Trump.

Kaine said that anyone voting for Donald Trump has moved too far from the Republican Party, and that any Republican left in the dust of the new GOP extremism has a place in the Democratic Party.

“We all should feel the Bern, and we all shouldn’t want to get burned by the other guy!” he announced to chants of Bernie Sanders’ name.

“Can I tell you a funny thing about the Senate?” he asked. He continued on, “Representatives and senators would all tell you how fantastic a senator Hillary Clinton was."

He then began to tell the audience why he trusts Clinton.

“First, she is consistent. She has battled to put families first since she was a teenager,” he said.

“When you want to know something about the character of somebody in public life, look to see if they have a passion that they have consistently held…folks, Hillary has a passion for kids and families!”

Kaine went on, “Donald Trump has a passion too. It’s himself!”

He joked that Trump must have something nefarious in his tax returns. The entire crowd agreed.

The audience announced in unison “no” to the question: “Do you believe him?”

“Folks, you cannot believe one word that comes out of Donald Trump’s mouth.”

“Believe me” is a phrase Trump is known for. But Kaine highlighted the importance of providing proof of what to believe.

He directed the audience to Hillary Clinton’s website, wherein she describes in detail all of her policies and plans. Alternatively, he said Trump's website highlights zero plans.

He ended his acceptance speech by telling the crowd, "Hillary Clinton is 'listo'; – she is ready."