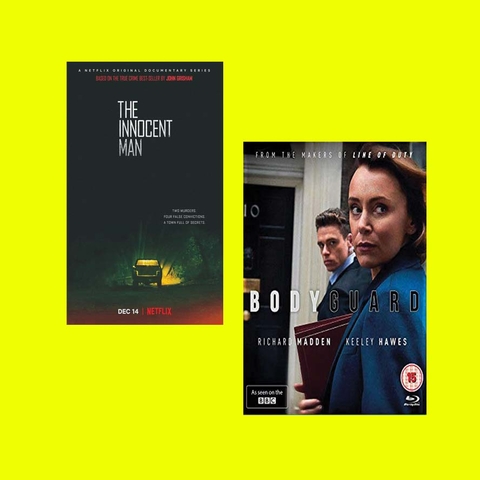 The Innocent Man: This six-episode Netflix documentary deconstructs some murders and convictions that took place in Ada, Oklahoma in the early ‘80s.

The first victim was 21-year-old Debbie Carter who was raped and killed in her home. The second was several years later when 24-year-old Denice Haraway was kidnapped from her job at a convenience store and later murdered.

There is tremendous controversy surrounding the prosecution of the two men charged, Tommy Ward and Karl Fontenot. They were sentenced to life for Haraway’s murder. More controversy erupts around the charge and conviction of Ron Williamson and Dennis Fritz for the murder of Carter.

In 1999, the Innocence Project used DNA testing to free Williamson and Fritz. Ward and Fontenot remain in prison, although loose threads in solving the irregularities of the justice they received abound.

The abuse of power and small-town slanting gives this true crime creeper added binge-worthiness. In this docu-series, author John Grisham explains what drew him to investigating and writing about these cases in the first place.

Did the Ada DA purposely and repeatedly withhold exculpatory evidence to secure convictions of innocent men? You’re left with many, many questions about everything.

Bodyguard: I took an evening off to view all six episodes, and I don’t regret it. Perhaps these sorts of taut psychological BBC thrillers tempt me anyway.

The script was very skillful in seamlessly blending in the influences of Homeland, The Usual Suspects, Pulp Fiction, and other such series and films. That is part of the fun.

David Budd (Richard Madden; also, Rob Stark in Game of Thrones) is an untreated PTSD war vet advanced through the government security ranks after he successfully talks down a suicide bomber from blowing up a passenger train. He is assigned to protect the British Home Secretary (Keeley Hawes) who has conservative views clashing with his opinions.

Trust is slowly built, regardless, even as Budd struggles with mounting personal and professional problems. There is a terrorist cell intent on the assassination of the Secretary and other public bombings ongoing. Even worse, there are leaks in the government and corruption at high levels from political parties and personalities (sound familiar?).

It’s a bit like an Oliver Stonesque Kennedy assassination conspiracy dream at points and drifts into soapy melodrama briefly, which grippingly works. Suspend your disbelief and run with the momentum.

This film amazingly manages to overcome any minor flaws and rivets you to the screen. Madden’s coiled spring performance as Budd rightfully won this year’s Golden Globe.