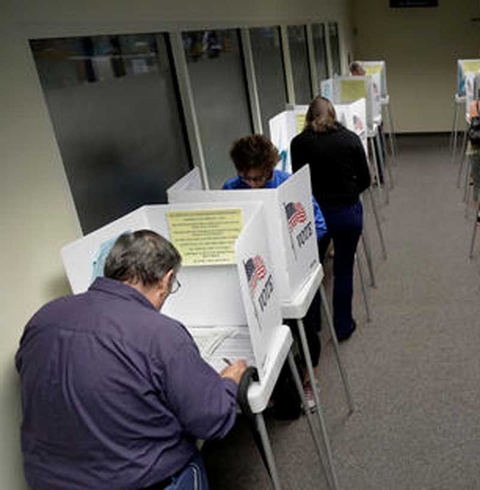 Democrats will argue before a federal judge in New Jersey on Friday that Republicans are coordinating with GOP presidential nominee Donald Trump to intimidate voters, charges that the Republican Party says are not true in either the federal case or in the four other states where Democrats are waging similar battles.

The legal challenge is one of several around the country filed by Democrats claiming Republicans and the Trump campaign are pushing supporters to intimidate and confront voters on Election Day. Trump has called on his supporters to act as "election observers" in certain areas of the country to help prevent fraud.

A federal judge in Las Vegas on Thursday said he hasn't seen evidence that Trump's campaign is training people to intimidate voters. Republicans also fought back against charges of wrongdoing in Arizona on Thursday, while arguments will be heard on Friday in Ohio and in Pennsylvania on Monday.

The federal case being heard in Newark, New Jersey, seeks to link some of those poll watchers and state parties with the Republican National Committee, arguing that any collaboration on voter intimidation or ballot security efforts would violate an agreement that the RNC has been forced to follow since 1982.

The RNC admitted no wrongdoing, but agreed to the decree to settle the case. The decree only regulates work done by the RNC and is scheduled to end next year. The Democratic National Committee wants it extended another eight years, but needs to convince a judge that the RNC has violated the 34-year-old rules.

The DNC says in court papers that the RNC has supported Trump's efforts to "intimidate and discourage" minorities from voting. It cites past statements made by Trump's campaign manager and vice presidential nominee Mike Pence about collaborating with the RNC and also has sworn statements from five Democratic election workers in Las Vegas who say Republican counterparts were working on the RNC's behalf when they gave voters bad information.

The RNC denies all of that, pointing out that campaign manager Kellyanne Conway later said she was mistaken and Pence also said he had no knowledge of any effort between the campaign and the RNC to ensure ballot integrity. The RNC says that the election workers cited by the DNC were not employed by the RNC.

The RNC says it has made complying with the consent decree a "top priority." It says it informed Trump's campaign in August that it would not participate in any ballot security programs, and also informed state parties about the decree.

In both the state and federal cases, Democrats cite the work of Roger Stone, a Trump friend and informal adviser, who has launched an effort to sign up supporters to volunteer to fight "voter fraud." Stone also was Republican New Jersey Gov. Tom Kean's campaign manager in the 1981 race that led to the consent decree.

The Democrats allege that Trump's calls to supporters to show up at the polls to prevent voter fraud amounts to illegal intimidation tactics and that Stone is organizing volunteers to confront voters.

But Republicans say there is no evidence that any intimidation is happening. State and federal laws already bar intimidation and the Democrats are asking for orders that would unconstitutionally bar protected political speech, they've argued in court documents.

In Nevada, U.S. District Judge Richard Boulware said Thursday he doesn't expect to issue a restraining order that Democrats sought ahead of Tuesday's election, but won't issue a final ruling until a hearing on Friday about whether Stone was encouraging what Democrats call "vigilante voter intimidation."

Adam Gitlin, counsel for the nonpartisan Brennan Center for Justice's Democracy Program, said that no matter what happens in the legal arguments, he worries the rhetoric on voter intimidation and ballot security could discourage people from voting.

"The most important thing that people can do is go out and vote this election and make sure you cast a ballot," Gitlin said. "This kind of rhetoric can be discouraging, both to voters who may be concerned about intimidation, and to Mr. Trump's own supporter who may doubt that their vote is going to count, which is also untrue."