Wanna be a trans ally? Then vote! 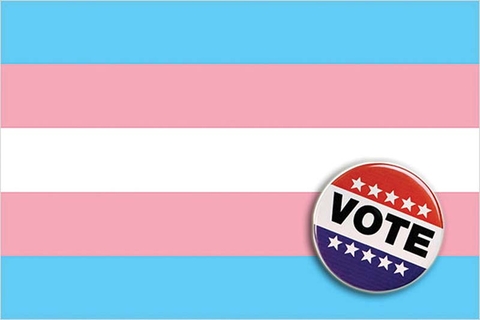 It’s November again which means I am probably busy trying to figure out a way to avoid cooking a damn turkey again this year because I’m pretty much over it.

It’s also Transgender Awareness Month and with it, Transgender Day of Remembrance, which means I should be writing about some tragic thing that tugs at your heartstrings, yadda, yadda.

I mean, I could run through the whole thing about how we have health issues, or money issues, medical care, or what have you, but there’s something about drawing your attention to transgender issues not a lot of people talk about and that, my friends, is voting.

Let me explain this to you real simple. You see, no one in this world got full rights and protections without having the right people in office to give them to them. Women had friendly politicians who granted them their right to vote. Black people had friendly politicians who appointed the right judges and passed the right laws to give them their equality, and gays and lesbians managed to elect the right people to office to get their rights.

Now it’s our turn to get the right people elected to office to give us our rights. The problem is, is there’s not a lot of us to really sway the election, so we need our allies to get out and vote.

Now days though, we would be content not so much as the world’s greatest champion of transgender issues being elected, but honestly, anyone who wouldn’t take away our rights. You know, like a lot of the politicians currently in office that rhyme with “Trump.”

Now, if you for some reason think your vote doesn’t matter, or you don’t like the candidates, but do, in fact, care about transgender people, then I must ask, “Why aren’t you voting?”

Oh, I get that you have objections to one issue or another, but if there’s a candidate who isn’t a hateful, horrible human being who won’t take away our rights, I strongly encourage you to vote for that one. Now, I get you want your perfect progressive super-candidate, but I also want to be on Star Trek, and neither is going to happen.

There’s a quote you might have heard before, “You can’t be neutral on a moving train.” Basically, events are going to happen whether you want them to or not. Inaction means you’re passively letting events happen which you may not like, especially if your inaction allows the wrong people to hold power and make decisions that hurt people you care about.

When you do decide about voting, if you truly care about trans people, if you don’t vote or vote for the wrong people it can hurt an entire subset of the community, such as the trans community. This election is more important than ever for a lot of reasons, and with transgender rights being threatened in not only Oklahoma but all over the country, it’s important to us.

Please consider what your vote means to your transgender friends not only here but all over this world.