Why saying Roe v. Wade is 'settled' isn't saying much 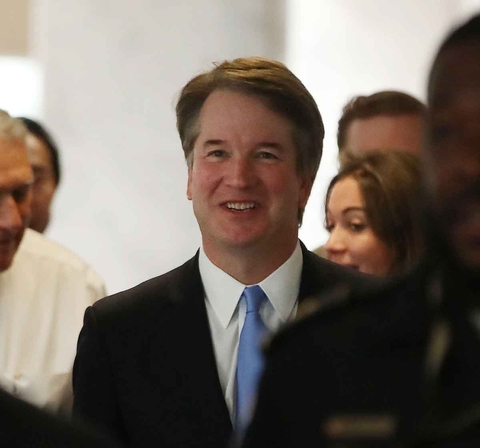 When Sen. Susan Collins, a Republican who supports abortion rights, emerged from her office last month after her first meeting with Judge Brett Kavanaugh, reporters listened closely trying to divine whether she would back President Donald Trump's Supreme Court nominee.

Her vote, in a closely divided Senate, could help to determine not only Kavanaugh's fate, but the future of Roe v. Wade, the historic 1973 opinion that legalized abortion. Although the opinion was decided more than 40 years ago, it remains a lightning rod in modern confirmation hearings as senators on each side of the issue have tried to press nominees to tip their hands.

Abortion opponents hope that Kavanaugh will provide a fifth vote on a court decision to either overturn Roe or weaken the decision. The stakes are high. Kavanaugh has never opined directly on the case, but if confirmed, he will fill the seat of Justice Anthony Kennedy, who was a key swing vote on the issue of abortion restrictions.

To reporters, Collins suggested that she thought Kavanaugh respected Roe because he told her that it was "settled law."

"He said that he agreed with what (Chief) Justice (John) Roberts said at his nomination hearing in which he said it was settled law," Collins said.

But in reality, as both sides of the issue know, using the word "settled" isn't saying much.

In fact, any potential nominee asked about almost any Supreme Court case will likely say it's "settled." What they don't usually say is that while a lower court nominee must accept Supreme Court precedent, a sitting justice does not. They can vote to unsettle it.

Earlier this year, for instance, the court overturned a 40-year-old precedent when it delivered a blow to public sector unions in striking down an Illinois law that required non-union workers to pay fees that go to collective bargaining.

In Kavanaugh's hearings that start Tuesday, Democrats want to push Kavanaugh on abortion.

"It's not enough for Brett Kavanaugh to say that Roe is 'settled law,'" Sen. Dianne Feinstein said a tweet after Collins' comments.

"Chief Justice Roberts said the same thing in 2005," the California Democrat added. "Then he voted in favor of a law that would have forced 75% of Texas clinics to close. Fool me once, shame on you. Fool me twice, shame on me."

Indeed, during his confirmation hearings Roberts, like other conservatives Samuel Alito and Neil Gorsuch, said that Roe was settled.

"It's settled as a precedent of the Court, entitled to respect," Roberts testified in 2005. But in her tweet, Feinstein referred to the fact that in 2016, Roberts dissented when the court struck down parts of a Texas law that would have shuttered all but a handful of clinics in the state.

At his confirmation hearing in 2006, Alito said that Roe had "been on the books for a long time" and had been reaffirmed by the justices. Gorsuch, Trump's first nominee to the bench, said last year that Planned Parenthood v. Casey, an opinion that reaffirmed the core holding of Roe, is "settled law."

Supporters of abortion rights suggested Collins had been snookered.

"With all due respect to Sen. Collins, 'settled law' means nothing, said Ilyse Hogue, president of NARAL Pro-Choice America. "It's a bunch of code words, long used by many conservative judges, meant to hide their real beliefs and anti-choice record."

Meanwhile, opponents of abortion are optimistic that Kavanaugh will vote in their favor. Trump, after all, promised In a 2016 CBS interview that his "judges will be pro-life."

After Collins' comments, Catherine Glenn Foster, president of Americans United for Life, a group that opposes abortion, said that Kavanaugh was "only restating the position the Supreme Court has taken in Roe."

And in an interview with CNN's Dana Bash on Sunday, Sen. Lindsay Graham, a staunchly anti-abortion Republican from South Carolina, acknowledged that saying a case is "settled" doesn't mean it can't be overturned.

"Well, here's what I hope he will do," Graham said. "If there's a case before him that challenges Roe v. Wade, that he would listen to both sides of the story, apply a test to overturn precedent," Graham said. "Precedent is important, but not inviolate," he said.