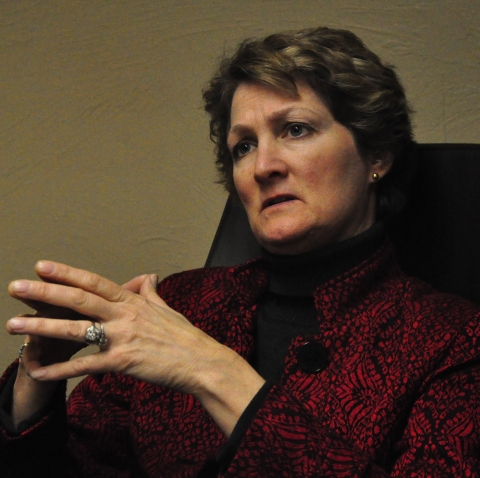 In a state that has been considered one of the reddest in the nation, another openly gay Representative has announced a bid for a higher elected office.

In a statement, Floyd said “Senator McAffrey was a great legislator for House District 88 and Senate 46 and I know he will bring common sense leadership to Washington, just like he has to Oklahoma. I hope to continue his legacy of strong, progressive leadership in the State Senate, just as I have in the House.” As the first openly gay woman in the legislature, state representative Floyd has spearheaded issues most important to women and children including enhancing education, expanding suicide prevention, and reducing domestic violence. Both as a representative and a community leader, Floyd has a reputation of standing up for all Oklahomans.

“Our state is plagued with extreme policies that don’t work for every day Oklahomans,” said Floyd. “We see education being cut left and right while many Oklahoma families are struggling to get by. Every year, we see legislation passed that only benefits a few and our state’s leadership continues to push us down the wrong path. I am dedicated to continuing the fight to make sure every day Oklahomans have a voice.” Floyd was elected to the Oklahoma House of Representatives in 2012. Before serving in the legislature, she served as an Assistant Attorney General, the Deputy Executive Director for the Oklahoma Horse Racing Commission, a State Administrative Law Judge and an Oklahoma City Municipal Law Judge. She has been a leader in the legal, educational and nonprofit communities, dedicating her time to improving the lives of Oklahomans, especially women and children.