Anti-LGBTQ bias in the wake of Senate scandal 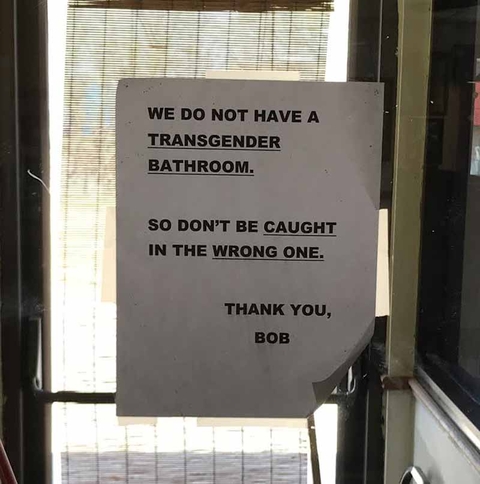 The discriminatory and threatening sign posted in the "Steak and Catfish Barn" in northeast Oklahoma City. Photo by Troy Stevenson.

After dealing for most of the day with the news about Oklahoma State Sen. Ralph Shortey being accused of soliciting a "juvenile male" sex-worker, Freedom Oklahoma, the statewide LGBTQ advocacy organization, has been alerted to a case of discrimination and threats toward the transgender community in Oklahoma.

The organization believes the threats are rooted to a "transgender bathroom bill" proposed last year, a bill Senator Shortey voted to advance. These stigmatizing bills create fear, bias and discrimination against the LGBTQ community even when they fail.

As an example of the bigotry against transgender people, Freedom Oklahoma points to a sign at the “Steak and Catfish Barn”, located at I-35 and Hefner in northeast Oklahoma City, says, “We do not have a transgender bathroom. So don’t be caught in the wrong one. Thank you, Bob.” 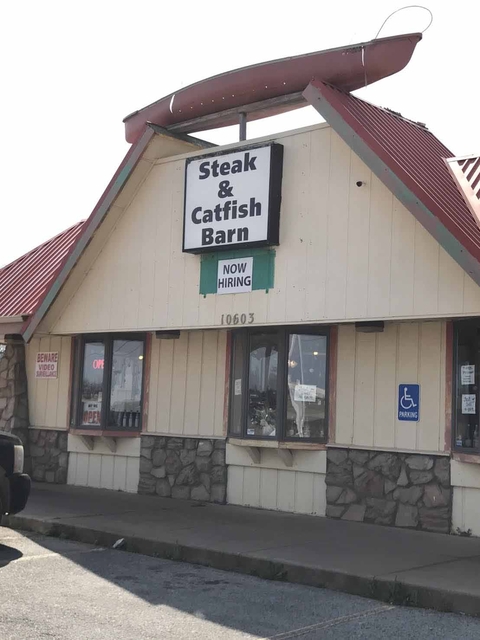 The Steak and Catfish Barn in Oklahoma City has signs threatening transgender persons posted at their bathroom. Photo by Troy Stevenson.

Transgender bathroom bills are often based on the disproven allegation that transgender people are likely to sexually assault women when using bathrooms that conform to their gender identity.

Freedom Oklahoma says, in a statement, “We find it highly ironic that Senator Shortey voted to advance this legislation out of committee, and less than a year later, he was caught in what appears to be actual predatory behavior toward a vulnerable youth.”

The sign at the "Steak and Catfish Barn" is not only discriminatory, it implies the threat of violence against an individual who is - or is perceived to be - transgender.

There has never been a legitimate recorded incident in Oklahoma of a transgender person harming anyone in a restroom, yet there are numerous accounts of predatory behavior by anti-LGBTQ legislators who have taken bigoted votes akin to the vote Senator Shortey cast last year.

Another angle to the Shortey scandal in the Senate that is being missed is the high incidence of LGBTQ youth who are forced into sex-work because they have been rejected by family and society based on their sexual orientation or gender identity.

They are also much more likely to be coerced by predatory adults in positions of power. LGBTQ youth are almost twice as likely to be victims of sex-work and human trafficking because of societal bias towards the community.

The state Senate today took quick action against Sen. Shortey, effectively suspending him from his position.

Troy Stevenson, Executive Director of Freedom Oklahoma, reacted to the day’s events, and the bigoted sign at the “Steak and Catfish Barn,” saying, “Freedom Oklahoma commends the Senate for taking swift action in sanctioning Senator Shortey in this matter and will closely follow the investigation when and if charges are filed by the Cleveland County District Attorney.

“We hope Senator Shortey's hypocrisy will show Oklahoma lawmakers the bias caused by ill-conceived and discriminatory legislation, and that they will refrain from passing or proposing laws that put the LGBTQ community in jeopardy.

“The threat issued by the ‘Steak and Catfish Barn’ is the most overt type of bigotry aimed at trans Oklahomans; however Freedom Oklahoma regularly gets reports of trans people being threatened, harassed, and intimidated simply for living their lives; and ironically someone who appears to be an actual predator has moved these biased bills forward.

“Our greatest hope is that lawmakers will see fit to protect all Oklahomans from discrimination and predatory behavior by passing laws to protect minorities and LGBTQ youth who are often forced into sex-work because of the hatred aimed at our community."