AP Interview: DeVos says she should have decried racism more 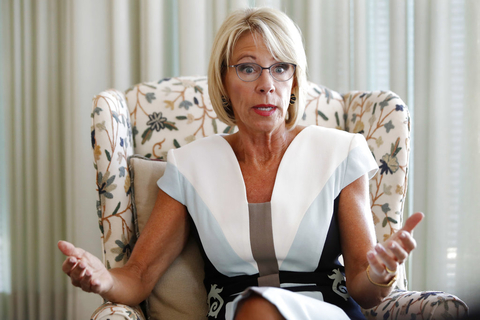 WASHINGTON (AP) — Education Secretary Betsy DeVos on Wednesday distanced herself from her comment earlier this year about the nation's historically black colleges and universities being pioneers of school choice, saying that in the past "there were no choices" for African-Americans in higher education.

"When I talked about it being a pioneer in choice it was because I acknowledge that racism was rampant and there were no choices," DeVos said in an interview with The Associated Press in her office at the Education Department. "These HBCUs provided choices for black students that they didn't have."

"My intention was to say they were pioneering on behalf of students that didn't have another choice. This was their only choice," DeVos said. "At the same time I should have decried much more forcefully the ravages of racism in this country."

The Trump administration and DeVos have come under criticism from civil rights advocates for undoing some civil rights protections, including rescinding Obama-era federal guidance that instructed schools to allow transgender students to use the bathrooms of their choice and President Donald Trump calling for banning transgender individuals from serving in the military.

DeVos, a billionaire Republican donor and long-standing school choice activist from Michigan, said that she has spent her career campaigning on behalf of minority children.

"That's where my heart has been for three decades is to really empower and allow all families the same kind of opportunities I've had for my kids," she said.

At the same time, DeVos acknowledged that she could have done more to reach out to African- American communities around the country to make her position more clear.

"I've had these conversations with some of the African-American organizations that represent higher education, but probably not as explicitly as I am right now," DeVos said.

The NAACP did not immediately return a call for comment about DeVos' remarks.

The issue of minorities' access to higher education remains controversial today. The Justice Department said last week it would conduct an inquiry into how race influences admissions at Harvard University after a coalition of more than 60 Asian-American groups brought a complaint alleging the school uses race as a factor in admissions and discriminates against Asian-Americans by holding them to a higher standard.

DeVos said her department was not involved in that process and added that this "has been a question for the courts and the courts have opined."

The Supreme Court last year upheld a University of Texas program that considers race, among other factors, in admissions, offering a narrow victory for affirmative action. A white Texan who was denied admission to the university sued, but the high court said the Texas plan complied with earlier court rulings that allow colleges to consider race in an effort to bolster diversity.

At America's elite private colleges, many of which have drawn criticism over race-conscious admission policies, incoming classes have become increasingly diverse in recent years.

Asked whether race should play a role in college admissions, DeVos said it is already being considered in the selection process.

But DeVos said the key to giving students equal access to higher education lies in elementary and secondary school.

"It is not fair to think that when students transit through a K-12 system that is not preparing them for beyond, that somehow we are going to waive a magic wand and things are going to be perfect for them at the higher-ed level," DeVos said.