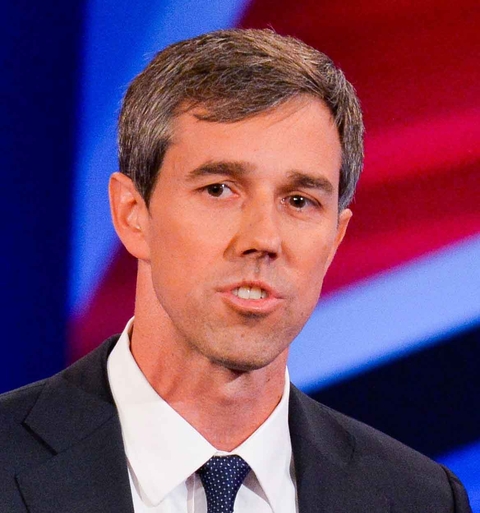 The former Texas congressman and 2020 Democratic presidential candidate is proposing a series of executive and legislative steps that also aim to make prisons and detention facilities safer for transgender people, particularly transgender women of color.

O'Rourke's plan would require health insurers, including government-run programs, to cover transition-related care and would seek to lower the costs of HIV prevention drugs.

He is also pledging to appoint judges and administration officials -- including openly LGBTQ selections -- "who have a demonstrated record of supporting the full civil rights of every single person."

The plan comes as O'Rourke is set to lead a two-mile run celebrating Pride month in New York City on Wednesday morning, from Rockefeller Park to the LGBT Memorial site in Greenwich Village. O'Rourke and his wife Amy also ran in the Pride Fest Fun Run 5K in Des Moines, Iowa, on Saturday.

O'Rourke's first political battle in favor of LGBTQ rights came in 2009, when he pushed for domestic partner benefits for El Paso, Texas, city employees while serving as a city councilman. His campaign is also touting 100% ratings from the Human Rights Campaign.

"LGBTQ+ Americans have made incredible progress over the past decade, thanks in large part to the tireless efforts of activists and advocates -- but too many LGBTQ+ people still lack protection under many states' laws and the current administration is encouraging rather than stamping out discrimination," O'Rourke said in a statement. "We must ensure all Americans are treated equally no matter who they are or who they love."

O'Rourke's proposal begins with the reversal of Trump administration military policies, as well as Trump's ban on transgender service members and end the Pentagon's "Deploy or Get Out" policy that could lead to the discharge of HIV-positive service members.

He would also reinstate Obama-era non-discrimination policies that allow transgender students to use the bathrooms that correspond with their gender identity and prevent health care providers from denying insurance or care to LGBTQ people because of personal, moral or religious beliefs. The Trump administration has moved to roll back those policies.

And O'Rourke would return to Obama policies that barred adoption and foster care agencies that receive federal funds from rejecting same-sex couples and viewed employment discrimination based on sexual orientation as prohibited by the Civil Rights Act.

O'Rourke's plan includes steps beyond the Obama administration, too, including prioritizing "the research necessary to modernize the outdated blood donation requirements" that prohibit gay and bisexual men who have had sex in the last year from donating blood.

The plan aims to protect LGBTQ prisoners by requiring law enforcement agencies to receive training on implicit bias, ensuring the safety of transgender prisoners and requiring that they receive the health care they need.

LGBTQ people fleeing persecution and seeking asylum in the United States would be identified as a "vulnerable population" under the plan in order to keep them out of detention in hopes of protecting them from sexual violence.

Under O'Rourke's proposed plan, he would also direct the Department of Justice to investigate crimes against transgender people, with an emphasis on transgender women of color.

He would push the Federal Trade Commission to address conversion therapy as consumer fraud, a step toward banning the practice that mirrors a bill O'Rourke and other Democratic lawmakers had co-sponsored but that did not become law.

And he would seek to count LGBTQ individuals by adding questions about sexual orientation and gender identity to the Census, including crime data related to LGBTQ youth in the Bureau of Justice Statistics and directing the Equal Employment Opportunity Commission to prioritize collecting data and enforcing non-discrimination laws.

O'Rourke's plan also includes a series of actions that would require congressional approval.

He would back the Equality Act, which would codify anti-discrimination protections for LGBTQ Americans in areas like health care, employment and housing.

He would also seek to require coverage for HIV prevention and treatment, hormone and other gender-affirming treatment by "creating a universal health care system with explicit protections against discrimination and bans on exclusions for transition-related care, and by tackling price gouging by drug companies so critical and effective treatments like PrEP are accessible and affordable."

He would seek a treaty through the International Law Commission of the United Nations that protects people from persecution based on sexual orientation, gender identity or sex characteristics and establish a a Special Envoy for the Human Rights of LGBTQ+ people within the Department of State.