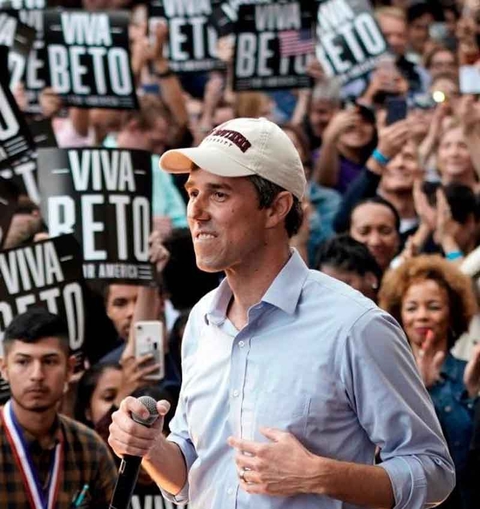 Beto O'Rourke raised $9.4 million in the first 18 days of his bid for the 2020 Democratic presidential nomination, his campaign said Wednesday.

The former Texas congressman's haul puts him behind Sen. Bernie Sanders, who raised $18.2 million in the first 41 days of his campaign, and Sen. Kamala Harris, who raised $12 million since launching her 2020 run in late January.

O'Rourke's campaign emphasized the short window between his launch and the close of the year's first fundraising quarter -- noting that his average of $520,000 per day is the most any candidate has raised.

Much of that money has come in two short bursts: The first day of his campaign, during which he raised $6.1 million, and the final weekend of March, when he raised more than $1 million.

His campaign did not say how much money it had spent and had left in the bank at the end of March. A fuller picture of the O'Rourke campaign's finances will be available when it files its report with the Federal Election Commission, which is due April 15.

O'Rourke's campaign said it received 218,000 contributions, though it did not reveal how many individuals were responsible for those contributions -- and some people could have donated multiple times.

It said 98% of the donations it received were for less than $200. It did not say how much of its overall $9.4 million haul came from those small-dollar donations, but said the average contribution it received in the first quarter of 2019 was $43.

O'Rourke's strength as a small-dollar fundraiser was part of what propelled him from a loss in last year's Texas Senate race -- where he smashed Senate campaign fundraising records with an $80 million haul -- to the 2020 presidential campaign.

He has sworn off donations from lobbyists and political action committees. Saying that his run for president is fueled by "no PACs, just people" is among his most frequent talking points on the campaign trail as he calls for limits on the influence of money in politics.

"In just 18 days, people in every state and from every walk of life have organized in homes, contributed a few bucks online and united together to show that the power of people is far greater than the PACs, corporations and special interest that have captured, corrupted and corroded our democracy for far too long," O'Rourke said in a statement. "Not only is this a sign of our grassroots strength during the first two weeks of our campaign but it is a sign of what's possible when you put your full trust in the people of this country."