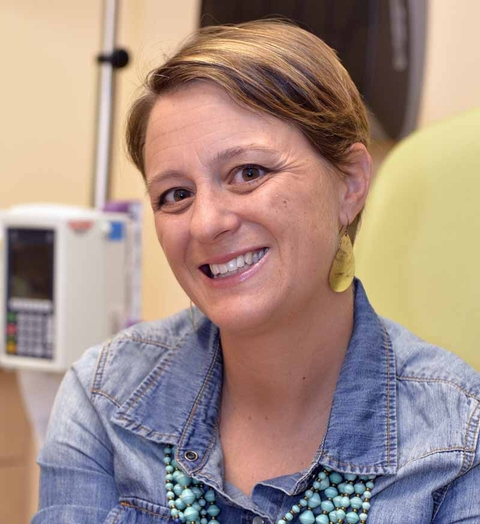 Lara MacGregor, a participant in a new crowdsourcing project for metastatic breast cancer research, poses for a photo as she undergoes treatment at the Norton Cancer Center. AP Photo, Timothy D. Easley.

Chicago (AP) — Forget the pink ribbons. Spitting in a tube for science is what unites a growing group of breast cancer patients taking part in a unique project to advance treatment for the deadliest form of the disease.

For many of the 150,000-plus patients nationwide whose tumors have spread to bones, brains, lungs or other distant organs, the hue heralding breast cancer awareness and survival each October is a little too rosy. They know cancer will likely kill them. And they've often felt neglected by mainstream advocacy and medical research.

But now they have a way to get involved, with a big new project that aims to gather enormous troves of information about their diseases in hopes of finding new and better ways of treating patients like them — women whose cancer has spread, or metastasized, and left them nearly out of options.

"Patients want to live and we know that research is the way that we're going to be able to live," said Beth Caldwell, a former civil rights attorney in Seattle diagnosed with metastatic disease in 2014.

The idea is to gather molecular and genetic clues from as broad a group of metastatic breast cancer patients as possible. With data from thousands of people, researchers think they will be better able target treatments or come up with new ones by answering important questions about the disease. For example: Is there something unique about tumors that spread to the brain, or that recur many years after diagnosis? What allows a very few women to outlive others by many years despite the same prognosis?

Most breast cancer patients are treated at centers that don't do research on tumors, so participating in studies at academic medical centers far from home is cumbersome at best. Patients sick or dying from their disease face additional hurdles.

This project is different. Patients sign up online, mail in saliva kits for genetic testing, and allow use of their tumor tissue samples and medical records. Researchers use social media to keep them posted about progress, and periodically invite participants to visit the Cambridge, Massachusetts, lab where their specimens are being analyzed.

The Metastatic Breast Cancer Project is run by scientists at Harvard and Dana-Farber Cancer Institute and was launched last October with funding from the Broad Institute of MIT and Harvard, an independent nonprofit group. Using word of mouth and social media, it has already enrolled more than 2,600 patients — a pace nearly unheard of in medical research.

"I enrolled from my recliner in my living room. I did my spit tube in bed," Caldwell said.

The mother of two turns 40 on Thursday, and cancer has reached her brain, lungs, bones and liver. She tries to stay positive, but October "is a month where I just want to hide under the covers and check out," Caldwell said. "I just don't want to be confronted with all this pink garbage."

"Everything about breast cancer is about survivors and beating cancer," MacGregor said. "And we're sitting in the wings saying, "I'm never going to celebrate the end of treatment.'"

MacGregor was pregnant when diagnosed with early-stage breast cancer in 2007. She had both breasts removed plus chemotherapy, and went on with her life thinking she was cured until two years ago, when tests for nagging back pain revealed cancer had returned and spread to her bones.

Now 39, MacGregor read about the project online, decided immediately to take part, and emailed dozens of friends and connections who also signed on.

Before she mailed her saliva kit, "my 8-year-old drew a picture on the box and said, 'thanks for helping my mom,'" MacGregor said. "I hope that real data about real people is going lead to better treatment options," she said. "My life depends on it."

More than 200,000 people, mostly women, are diagnosed with breast cancer nationwide each year. Most are diagnosed when cancer is at an early, potentially curable, stage. For about 6 percent, or 15,000 patients, the disease has already spread at diagnosis.

And for about 30 percent of patients diagnosed with early-stage breast cancer, the disease will eventually recur in distant parts of the body. The average survival for patients with metastatic disease is about three years.

According to a 2014 analysis from an alliance of breast cancer advocacy groups, less than 10 percent of government and nonprofit groups' investment in breast cancer research in recent years went to studying metastatic disease.

"Metastatic breast cancer in general is an understudied area," says Mark Hurlbert of the Breast Cancer Research Foundation. "We don't know, for example, how the tumor has changed. Is it the same makeup as it was before? Do cells have a different molecular profile than cancer that started first in the breast?"

By gathering large numbers of tissue samples and information about how the diseases progresses in different people, the project may be able to uncover useful trends. It has produced a few enticing clues already, including small groups of patients who've responded unusually well to standard chemotherapy or to new immunotherapy drugs — some have survived for 10 years or more. The researchers hope DNA analyses will help explain why and lead to treatments that will improve the odds for all patients with the disease.

Data will be posted on a special online site and with the National Cancer Institute's genomic data program — making it available to other scientists and boosting the odds of finding better ways to treat patients with metastatic disease.

And proof that crowdsourcing can draw thousands of patients to medical research is an important discovery itself, given how hard that can be, said Dr. Nikhil Wagle, a project leader and an assistant professor of medicine at Harvard and Dana-Farber.

"This project makes them feel empowered, makes them feel like they are making a difference — if not to help themselves, then maybe the next generation of patients," Wagle said.

By Lindsey Tanner, AP Medical Writer. Copyright 2016 The Associated Press. All rights reserved. This material may not be published, broadcast, rewritten or redistributed.