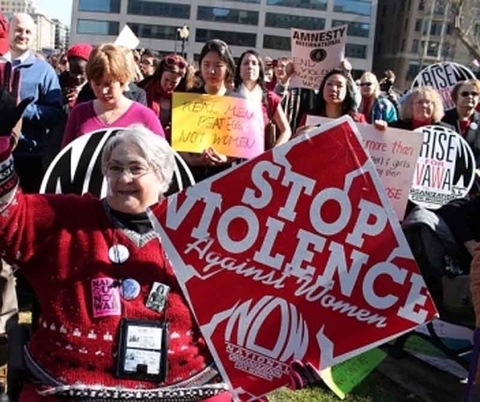 Democrats turned the spotlight on the expiring Violence Against Women Act on Thursday, introducing their own bill to reauthorize the legislation for another five years.

The current law, enacted in 1994 and reauthorized ever since, addresses sexual assault, domestic violence, dating violence and stalking, primarily by providing grants and support to organizations and law enforcement programs that work with domestic violence victims and prevention.

When they return in September, Congress will have only a few weeks before the existing law expires after September 30.

The bill proposed by Jackson Lee, who sits on the House Judiciary Committee, so far only has Democratic sponsors. It adds provisions to the current law, such as expanded programs for youth education and prevention. It also toughens protections for victims using housing grants, and it establishes a Violence Against Women director position in the Department of Housing and Urban Development, among other additions to the law.

During the last reauthorization of the bill, which took place in 2013, Congress struggled to find agreement over aspects of the bill pertaining to the inclusion of Native Americans, undocumented immigrants and lesbian, transgender and bisexual women. A Republican proposal was defeated in the House at the time, but the House ultimately passed a bipartisan Senate version of the bill.

"The law has enhanced and improved the lives of girls and women, boys and men. It has unquestionably improved the national response to these terrible crimes," Jackson Lee said at an event Thursday. "Nonetheless, much work remains to address unmet needs and to enhance access to protections and services for all victims, including sexual harassment, sex trafficking and tribal injustices."

Hoyer, who was an original co-sponsor of VAWA in 1994, urged his Republican colleagues "not to play partisan games" with the Violence Against Women Act.

"Let's come together, as we have in the past, to make sure that victims of domestic violence can get the support and safety and care and justice that they need," Hoyer said.

AshLee Strong, a spokeswoman for House Speaker Paul Ryan, said Republicans expect to pass a reauthorization bill by the deadline.

"The authorization expires at the end of September and we have every expectation that it will be reauthorized by then."

A Republican House Judiciary Committee aide said the committee is working to ensure VAWA is reauthorized but argued the Jackson Lee bill "has many controversial provisions that do not have the support needed to pass in the House," though the aide did not go into specifics about the provisions.