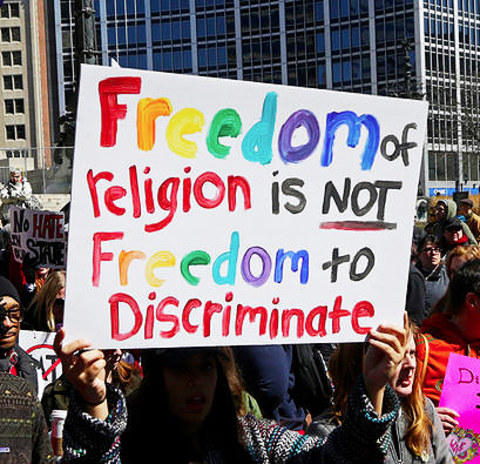 A Senate bill, authored by Sen. Brecheen (R), is in the works for the 2018 legislative session.

The sincerely held religious beliefs or moral convictions protected by this act are the belief or conviction that:

1. Marriage is or should be recognized as the union of one man and one woman;

2. Sexual relations are properly reserved to such a marriage; and

3. The terms "male" or "female" refer to an individual's immutable biological sex as objectively determined by anatomy and genetics at time of birth.

Paula Schonauer, an Oklahoma City equal rights activist had this to say, "I expect these things to pop up every session for the foreseeable future. That is, as long as the Republican Party dominates the Oklahoma State Legislature."

She continued, "The worst thing about these bills is the level of distraction they cause when our State Government is in the middle of a budget crisis...And they continually embarrass our state and impede progress."

Allison Ikley-Freeman, newly elected to the Oklahoma Senate from District 37 expressed her dismay for the bill, saying "This bill serves to protect people from a type of discrimination that frankly doesn't exist. It is not discrimination to be upset with or take action against someone who discriminates against you."

She continued, "On another level, it bothers me to see a bill restricting the state legislature from creating further laws in this area. At the end of the day this is moving backwards and does not help make Oklahoma a better place to live, or help people struggle less. It gives a majority religion permission to hurt people that don't conform. The definition of discrimination."

Richard Sturt, Chapter Head of The Satanic Temple said, "This bill further elaborates upon the well documented virtue signaling of conservatives consistent with their bible-belt victim complex. This bill never attempts to veil the blatant bigotry of Senator Brecheen or his lack of understanding regarding the law."

He continued, "In Christian shitholes, er, strongholds like Oklahoma, it’s easy for these politicians to forget that they aren’t the only act in town. They need only to walk out the north door of the capitol to see a simple reminder, the empty slab where their Ten Commandments monument once stood. The people of Oklahoma deserve better than a politician who wastes our time and tax dollars in efforts to further marginalize and oppress his own constituents."

The Gayly will keep you updated as this unfolds.