In final speech, Obama must reconcile his hopes with Trump's 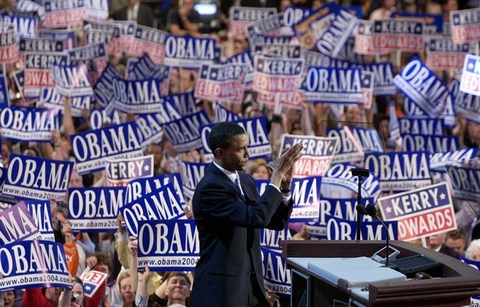 Obama's final speech as president, before thousands who will gather at McCormick Place, is his last chance to try to define what his presidency meant for America. AP photo by Charlie Neibergall.

WASHINGTON (AP) — Now an elder statesman, Barack Obama is returning to Chicago where he launched his unlikely political career for one final speech: a parting plea to Americans not to lose faith in their future, no matter what they think about their next president.

Obama's final speech as president, before thousands who will gather at McCormick Place, is his last chance to try to define what his presidency meant for America. It's a fitting bookend to what he started eight years ago. It was in Chicago in 2008 that the nation's first black president declared victory, and where over the years he tried to cultivate his brand of optimism in American politics.

"We've run our leg in a long relay of progress, knowing that our work will always be unfinished," Obama wrote Tuesday in a Facebook post previewing his speech. "And we've reaffirmed the belief that we can make a difference with our own hands, in our own time."

Obama has said he's leaving his eight years in office with two basic lessons: that Americans are fundamentally good, and that change can happen. "The system will respond to ordinary people coming together to try to move the country in a better direction," he said ahead of the speech.

The system did respond, in November, to Americans who by and large rejected Obama's policies by electing Republican Donald Trump.

Obama and Democrats had warned against a Trump presidency in apocalyptic terms. So now Obama's daunting task — the closing act of his political career — is to explain how his vision of America remains relevant and achievable for Democrats in the Trump era.

No stranger to high-stakes speeches, Obama rose to national prominence on the power of his oratory. But this speech is different, White House officials said.

Determined not to simply recite a history of the last eight years, Obama directed his team to craft an address that would feel "bigger than politics" and speak to all Americans — including those who voted for Trump.

His chief speechwriter, Cody Keenan, started writing it last month while Obama was vacationing in Hawaii, handing him the first draft on the flight home. By late Monday Obama was immersed in a fourth draft, with Keenan expected to stay at the White House all night to help perfect Obama's final message.

Ahead of his speech, Obama acknowledged that the chaos of Washington makes it easy to lose sight of the role American citizens play in democracy. He said that while he leaves office with his work unfinished, he believes his administration made the U.S. "a stronger place for the generations that will follow ours."

Seeking inspiration, Obama's speechwriters spent weeks poring over Obama's other momentous speeches, including his 2004 keynote at the Democratic National Convention and his 2008 speech after losing the New Hampshire primary to Hillary Clinton. They also revisited his 2015 address in Selma, Alabama, that both honored America's exceptionalism and acknowledged its painful history on civil rights.

Former aides were brought back to consult on the speech, including advisers David Axelrod and Robert Gibbs, and former speechwriter Jon Favreau, said the officials, who requested anonymity because they were not authorized to publicly discuss the private discussions.

The president, first lady Michelle Obama and Vice President Joe Biden will all travel to Chicago for the speech at McCormick Place, a sprawling convention center along Lake Michigan. For Obama, it will be his final trip aboard Air Force One as president, though he'll use the plane to depart Washington for an unspecified destination next week just after Trump is inaugurated.

In his hometown of Chicago, the prospect of witnessing Obama's last presidential address brought thousands out in single-digit temperatures over the weekend in hopes of securing tickets. They showed up well before sunrise and waited in lines that stretched for blocks.

Though he and his party were dealt a devastating blow in November's elections, Obama leaves office as a relatively popular president viewed favorably by 57 percent of Americans, according to an Associated Press-NORC Center for Public Affairs Research poll released the day before his speech. That puts Obama on par with former President Bill Clinton's popularity as he left office.

Yet Americans remain deeply divided over Obama's legacy, with fewer than half saying they're better off eight years later — or that Obama brought the country together. Two in three Americans said he didn't keep his promises, though most of those Americans said he tried to, but could not.

"He acted very presidential, but he just couldn't get things done," said Dale Plath, 86, a retired sales manager from Mason City, Iowa. He said he voted for Obama the first time, voted against him the second, and this year, Plath said: "I voted for change, frankly" — in the form of Trump.