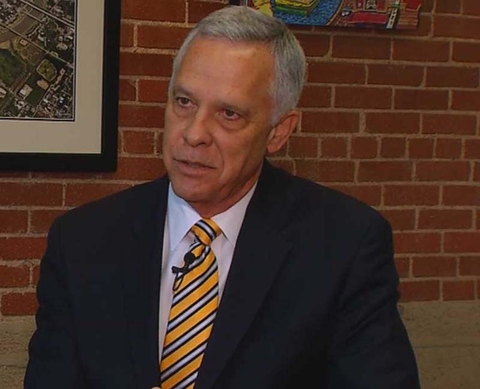 Rather than celebrating the diversity and expansion of Oklahoma City, former Mayor Kirk Humphreys appears to hang on to old stereotypes.

In the December 10th episode of Flashpoint, Humphreys and Oklahoma State Representative Emily Virgin joined moderator Kevin Ogle. In discussing the #MeToo movement, increased allegations of sexual harassment nation-wide and the resignation of US Senator Al Franken, the subject of homosexuality arose.

“So, you are asserting that there is a right and a wrong and that people’s personal behavior matters in their public standing? And yet you defend Barney Frank,” said Humphreys.

“Barney Frank, I mean, is homosexuality right or wrong? It’s not relative. There’s a right and a wrong. If it’s OK, it’s okay for everybody. And quite frankly [then], it’s okay for a man to sleep with little boys.”

Virgin replied, “I’m unclear at what Barney Frank did other than being a homosexual. Are you saying there was some inappropriate conduct on his part?”

"I’m saying there is a standard of right and wrong,” Humphreys said. “It’s not all relative.”

Virgin responded, “But to compare Barney Frank being a homosexual to Al Franken or John Conyers or the President or Roy Moore…

“I don’t think homosexuality is wrong.”

Humphreys replied, “Well, I do.”

Virgin replied, “What’s wrong is taking advantage of someone and preying on someone and touching them inappropriately. That is completely different than your moral stance on homosexuality.”

Referring to the arrest of former Oklahoma Representative Ralph Shortey, she added, “The Shortey situation…there were also child pornography charges and that is a completely different realm."

“All I’m saying is that there is a right and a wrong,” Humphreys replied.

“When you run for public office, you forfeit your right to have a private life. The public deserves to know what’s going on in your life and to hold you accountable. His or her private life matters because it’s a matter of integrity,” said Humphreys.

"I can’t get past the contrast here between the parties,” said Virgin.

It isn’t the first time Humphreys fought against the rights of the LGBT+ community. In 2001 then-Oklahoma City Mayor Kirk Humphreys led a push to remove banners celebrating gay and lesbian history month from city streetlights.

During the banner debacle, Humphreys proposed ordinance regulating the messages on city utility pole banners and bus benches. Rather than allowing free speech, Humphreys said, “We are not talking about free speech here. We are talking about paid advertising."

However, a "compelling public interest" must exist before a court decides a government can regulate public speech. According to reports, federal courts routinely have found that disliking a message's content is not a sufficient reason to ban certain types of speech.

The 2002 case, Cimarron Alliance v. City of Oklahoma was about these banners. The gay rights group filed a lawsuit against the city and won. Banners that read, "For a Fair and Just Oklahoma” were rehung by the city along Classen Boulevard.

Emily Virgin is an Oklahoma State Representative first elected in 2011 at the age of 25. She represents the 44th district, which includes Norman, Oklahoma. Kirk Humphreys is Chairman of The Humphreys Company and served two terms as Mayor of the City of Oklahoma City, from 1998 through 2003.