Gen Z will not be silent 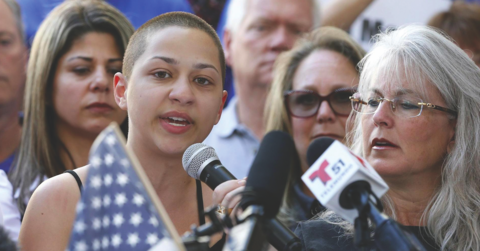 Emma Gonzalez speaks at a rally after a gunman killed 17 of her classmates. CNBC photo.

On February 14th of this year, a town, like many other towns in America, was changed forever. A gunman entered Stoneman Douglas High School, opened fire, and killed 17 students and teachers.

Additionally, 17 more were injured, and many of those who were able to escape safely became the activist’s others said they shouldn’t become.

Gen Z isn’t stupid, or even ignorant. It’s the generation raised with Google in a world of war, poverty and discrimination.

This generation has the knowledge and compassion to change the world.

Why would anyone assume otherwise? Was the idea of student activism lost when the student activists grew up? Do they not remember when they were assumed to be ignorant?

This generation isn’t here to eat Tide Pods and make self-deprecating jokes. They are here with strength, history, bravery, compassion, knowledge and a desire to change the world, which is what they will do.

Gen Z’er Malala Yousafzai, once said, “One child, one teacher, one book, one pen can change the world.” She is an activist who made a significant impact on her country and the world at age sixteen when she gave a speech at the UN.

Yousafzai wrote commentary about her experience as a child growing up in a war zone and being targeted and shot by the Taliban. She fought for the education of young women in her country, so who’s to say the Gen Z’ers here can’t fight for safety in schools?

David Hogg and Emma Gonzalez are at the forefront of this movement to end gun violence, but they are not alone on this path. Thousands of students walked out of their classrooms on March 14th again on April 20th in support of these outspoken activists.

Students are using social media to speak out about their need for safety in school, and how safety can be achieved through gun control.

Children as young as eleven years old are going out of their way to educate themselves on the political processes, gun control statistics and the literal, mechanical workings of firearms, to build their arguments to fight for their personal safety, and the safety of students all over the U.S.

Despite the obviousness of Gen Z’s ability, and willingness to educate themselves, why do older generations seem to rule them ignorant?

Gen Z has more resources for learning all sides of an issue than anti-war activists did in the 1960s, and they are as passionate.

Have these student activists of the past forgotten what it was like to be young and grow up in a damaged society? Have they deemed their AR-15s more important than the lives of their grandchildren? Perhaps they fear the government taking over.

Since the older generations are more educated than Gen Z’s are, they should understand a small semi-automatic rifle won’t stand up to nuclear missiles or tanks. What are they fighting for? What are they so afraid of that is somehow small enough to be destroyed by a gun?

Is it Gen Z? Is it the students who are ready to fight for life, liberty, and the pursuit of happiness, over money and power? At this point, that is all it could be. They appear to be ready to use their privilege and status to show they are powerful enough to stop this younger generation.

But attempts at destroying this generation’s values will not succeed. They will create a world of equality, safety, happiness and success beyond profit because this generation is worth more than our checking accounts.

A revolution is beginning, and no one will stop Gen Z. It’s time we strip away the all-for-one systems of our society and create something beautiful and healthy, based on human rights, where we are all entitled to safety, comfort, happiness, love and support.

“We are here to change the world. That’s exactly what we will do before we leave.”