How Ruth Bader Ginsburg became the face of the Trump resistance 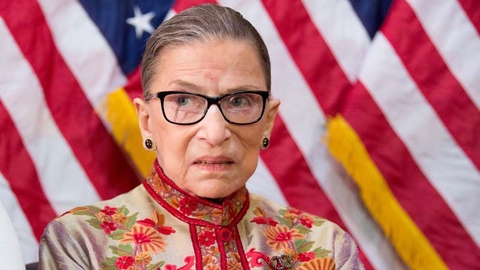 Justice Ruth Bader Ginsburg is the face the of the Donald Trump resistance. Photo by Allison Shelley of Getty Images.

The past two years have been nothing short of a hellscape for Democrats.

The stunning election of Donald Trump in November 2016 has been followed by a presidency that has taken as its fundamental motivation the undoing of everything President Barack Obama accomplished -- from the Affordable Care Act to a series of clean air and clean water regulations to some sort of path toward citizenship for children brought to the United States illegally by their parents.

Republicans have been broadly willing to rubber-stamp Trump — and overlook his conservative apostasies, exacerbating Democrats' angst.

But nothing has driven Democratic depression more than the fact that President Trump is now on the verge of appointing his second Supreme Court justice in less than 20 months on the job.

Putting conservative Neil Gorsuch into the spot left vacant by conservative Antonin Scalia was one thing. Filling the seat of retiring Justice Anthony Kennedy, the widely recognized swing vote on a number of major cases in recent years, with Brett Kavanaugh, a man who came to fame due to his role in the Starr Report, was quite another.

And it was all made worse for the party -- much, much worse -- by the fact that due to a series of rule changes begun by Democrat Harry Reid when he served as Senate majority leader, every one of the 49 Democrats in the Senate could vote against Kavanaugh and he can still wind up on the bench.

With the Democratic Party largely leaderless and the 2020 presidential primary race still a long way off, one person has served as a rallying point for dispirited Democrats: Justice Ruth Bader Ginsburg.

Read: ...contribution to our democracy

At first glance, Ginsburg seems like an odd figure to provide hope to Democrats, who have been forced to watch over the past few years as everything they hold sacred has been dragged through the mud by Trump. After all, Ginsburg isn't a politician -- and has no interest in being one. So how did we end up here?

It began during the 2016 election campaign, when Ginsburg broke the politics-what-politics? stance usually favored by Supreme Court justices, speaking out bluntly about her concerns regarding Trump.

"For the country, it could be four years. For the court, it could be -- I don't even want to contemplate that." Ginsburg doubled down on those comments in a subsequent interview with CNN, calling Trump a "faker," and adding: ""He has no consistency about him. He says whatever comes into his head at the moment. He really has an ego."

Trump, never one to take the high road, quickly shot back via Twitter: "Justice Ginsburg of the U.S. Supreme Court has embarrassed all by making very dumb political statements about me. Her mind is shot - resign!"

While Ginsburg subsequently said she regretted her overtly political comments -- "On reflection, my recent remarks in response to press inquiries were ill-advised and I regret making them," she said -- the narrative stuck, particularly after Hillary Clinton's shocking defeat at Trump's hands.

If Trump represented everything Democrats hated, then Ginsburg was everything they loved.

When Ginsburg skipped Trump's 2018 State of the Union speech, Democrats celebrated -- touting it as a sign of her unwillingness to bend to the domineering President. (If you believe Ginsburg, she simply had a prior commitment to take part in a fireside chat at Roger Williams University Law School in Rhode Island.)

When she announced, at an event in Washington in mid-August, that she had "about at least five more years" left on the court, Democrats roared their approval. (At 85, Ginsburg is the oldest member of the court, and is more than three years more senior than the retiring Kennedy.)

Though she has yet to return to her overt and public criticism of Trump, Democrats take moments like her skipping of the State of the Union or her insistence that she will serve on the court until she is 90 (and, theoretically, someone other than Trump is President) as acts of defiance. At a time when so few people, in Democrats' minds, will stand up to Trump's bullying style of leadership, a tiny octogenarian woman has stepped into the void and seemed to say: I'm not afraid of him at all.

By 2020, Democrats will have picked their nominee to take on Trump -- and, if history is any guide, will pour their hopes and dreams about resisting the President into that person.

But in the interim, the face of the resistance is a bespectacled grandmother with a killer workout routine. Politics is a funny business sometimes.