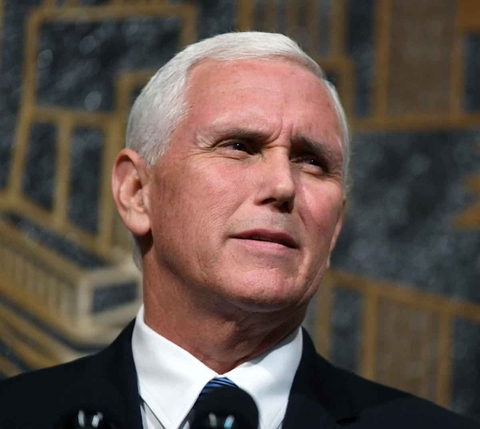 Jewish leaders from both political parties said Tuesday that it was "offensive" and "disappointing" to have a Messianic Jewish minister open a campaign event attended by Vice President Mike Pence on Monday.

Pence called Rabbi Loren Jacobs a "leader in the Jewish community," but many Jewish people consider Messianic Judaism to be a form of Christianity and reject the conflation of the two religions. At the rally, Jacobs prayed in the name of "Jesus the Messiah," but mainstream Judaism does not believe that Jesus was the long-awaited Jewish messiah.

The invitation of Jacobs, in the wake of the Pittsburgh synagogue shooting that took the lives of 11 people, has drawn criticism from American Jewish leaders -- both Democratic and Republican. The decision to invite Jacobs offended some Jewish people who were already wary about the Trump administration's commitment to defending Jewish interests and safety amid a rising tide of anti-Semitism.

An official in Pence's office said in a statement: "The speaker was invited by Lena Epstein, the candidate the VP was there supporting. We often have ecumenical prayers at the beginning of events that aren't an endorsement of any particular faith." Epstein, who is Jewish, is running to represent Michigan's 11th Congressional District.

Matt Brooks, the executive director of the Republican Jewish Coalition, called it "an unfortunate and disappointing mistake."

"Any kind of elevation or legitimization or profile for Messianic Jews or Jews for Jesus is unacceptable," Brooks said. "There is no circumstance where that is an acceptable speaker to represent the Jewish community."

"This was an unfortunate decision that was made by one of the campaign staffers, and quite frankly I wish that a different decision had been made," Brooks added.

Halie Soifer, the executive director of the Jewish Democratic Council of America, condemned the decision as a "failure of leadership."

She said in a statement, "So-called Messianic Jews are not a part of the Jewish community, and espouse views considered deeply offensive."

"In choosing this individual to give a 'unity prayer' at the Pence campaign rally, Epstein demonstrated that she lacks both the judgment and understanding to lead Michigan's 11th Congressional District," the statement reads.

David Kurzmann, the executive director of the Jewish Community Relations Council/AJC in Bloomfield Hills, Michigan, called the decision to invite a Messianic Jewish minister to represent the Jewish community in the wake of the tragedy in Pittsburgh "offensive" and "disappointing."

"We're trying to keep the focus on people whose lives were lost," Kurzmann said, but this "has caused outrage within the community," adding, "with good reason."

"If that person is representing or suggested to be representing the Jewish community in such a moment, particularly the timing with the tragedy in Pittsburgh, it's offensive," Kurzmann said.

Jacobs opened the rally by praying to the "God of Abraham, God of Isaac, God of Jacob, God of my Lord and Savior Yeshua, Jesus the Messiah, and my God and father too."

"I pray that you would comfort all those who are mourning because of those who were wounded and killed," Jacobs said. "Lord, please work so that instead of division in our nation there is unity and peace."

Eleven people were killed and six were injured on Saturday when a gunman opened fire at the Tree of Life Synagogue in Pittsburgh on Saturday morning. Forty-six-year-old Robert Bowers has been charged in the shooting.

Pence -- who was campaigning in Michigan for Republican candidates including Epstein -- later invited Jacobs onstage following his earlier remarks.

"I'm privileged to be joined today by a leader in the Jewish Community here in Michigan who's kind enough to join us today. I thought it might be appropriate if Rabbi Loren Jacobs would come out from Shema Yisrael Synagogue and offer a word of prayer for the fallen, for their families, and for our nation," Pence said during the rally.

Epstein said in a statement, "My family's history as Jews and my commitment to my Jewish faith are beyond question." Epstein said she is a proud lifelong fourth generation member of her synagogue, and said earlier this year her daughter received "her Hebrew name on the bimah at Temple Beth El."

Epstein's statement said this was an "effort of unity," and said, "I invited the prayer because we must unite as a nation -- while embracing our religious differences -- in the aftermath of Pennsylvania," the statement continued. "Any media or political competitor who is attacking me or the Vice President is guilty of nothing short of religious intolerance and should be ashamed."

"Now is the time for people of all faiths, of all religions, to come together as one and reject hate and religious divisions," Epstein's statement continues.

Epstein added she looks "forward to serving as the only Jewish Republican woman in Congress."

Michigan Attorney General Bill Schuette, who is running for governor, and candidate for US Senate John James also spoke at the rally.