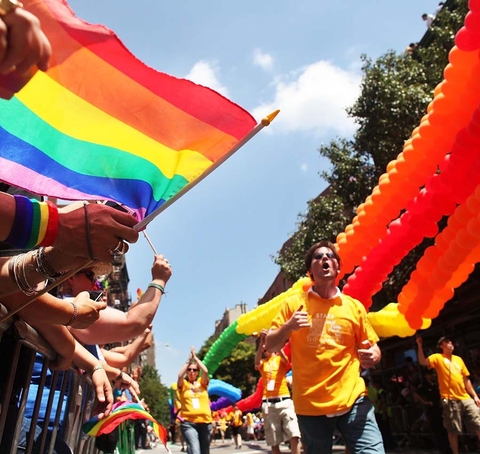 New York is playing host to WorldPride, the largest LGBTQ celebration in the world. Getty Images.

New Yorker Stephen Carella, 21, wore a shirt to Sunday's historic parade honoring the LGBTQ activists who made the celebration possible.

He wrote the names Marsha P. Johnson, Harvey Milk, Sylvia Rivera and Stormé DeLarverie in black marker on the front. The back noted that homosexuality is still illegal in many countries. "We still have work to do," the back of Carella's shirt read.

"A lot of people come to Pride for the photo ops," Carella told CNN. "I want to remember the people who fought for us. We stand on their shoulders."

Carella was among tens of thousands of people who flocked to downtown Manhattan from across the country and around the world for the first WorldPride celebration in the United States. The march comes at a time when LGBTQ rights are under threat in the United States. Yet the tone and messaging from marchers and parade-goers was celebratory and hopeful.

Law enforcement, including members of the Royal Canadian Mounted Police, held hands as they strode down the parade route to applause from the crowd. Members of cast of the FX drama, Pose, a show about New York City's LGBTQ ballroom culture in the 1980s and 1990s, served as grand marshals.

WorldPride took place during the 50th anniversary of the Stonewall riots, considered the catalyst for the modern gay rights movement.

The parade passed by the Stonewall Inn, the site of the 1969 uprising that saw the LGBTQ community fight back against NYPD officers who routinely raided the bar in Greenwich Village.

Solidarity "in this climate of hate"

Frances Goldin, 95, brought the same sign she says she has taken to New York Pride for 35 years. It read: "I Adore my Lesbian Daughters KEEP THEM SAFE."

Goldin is a longtime housing activist, after whom a senior affordable housing development in New York is named. She came with her daughter, Reeni Goldin, and Reeni's wife, Marge Burns.

"It's been 50 years (since Stonewall) and in this climate of hate we need to have a force of solidarity," Reeni Goldin said.

"And happiness," her wife added: "Happiness that we can be here."

More than 150 groups from outside the United States participated in the parade, organizers said. Members of the German delegation dressed as flight attendants with "Merkel Air" push carts. Marchers from Copenhagen were already gearing up for the next WorldPride in 2021, which will be hosted in the Danish capital. "Join us in Copanhagen & Malmö," one sign read.

As crowds gathered on sidewalks and parade participants clambered up on floats, Stephanni Morton and her wife posed for a photo in front of an NYPD vehicle that saluted the LGBTQ community.

"To see the police support gay pride is important because we need to be validated," said Morton, who traveled from Florida with her wife for WorldPride.

In a sea of rainbow flags, some marchers wrapped themselves in other designs. Some parade participants sported banners in pink, purple and blue, the colors of the bisexual flag. One man wore a T-shirt proclaiming "bisexual pride!" Blue, pink and white colors of the transgender flag were also spotted.

"Love us when we're under attack"

Late pioneering transgender icons Johnson and Rivera were honored as grand marshals of the parade.

RELATED: What started as a riot is now our celebration.

The two were good friends who played a key role in the Stonewall uprising. They emerged from the clashes as leaders of the gay liberation movement, and helped found the group Street Transvestite Action Revolutionaries (STAR), which offered housing to homeless and transgender youth.

Johnson's body was found floating in the Hudson River in July 1992. Rivera died in 2002 of complications from liver cancer.

Members of the TV show Pose not only served as grand marshals but a group from the show also marched in the parade.

The TV series is renowned for its LGBTQ cast, including Mj Rodriguez, Indya Moore, Dominique Jackson and Billy Porter. The show, which features an unprecedented number of transgender actors as series regulars, has gained a following for the way it tackles themes like HIV/AIDS, poverty and harassment faced by the LGBTQ community, and captures the community's resilience.

"That's when we need you the most," Moore said. "Love us when we're under attack."