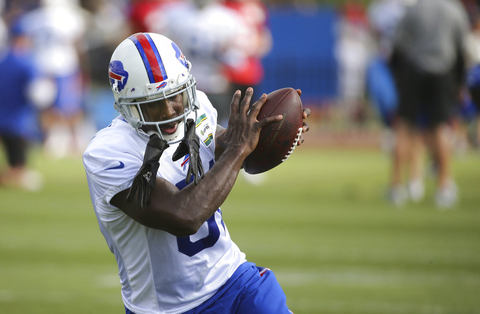 ORCHARD PARK, N.Y. (AP) — Anquan Boldin didn't decide overnight he was going to quit football in order to speak out against longstanding concerns over inequality in America.

The recent deadly and racially charged conflict in Charlottesville, Virginia, did, however, become the tipping point that caused Boldin to reassess his priorities and led to the Buffalo Bills receiver's decision to retire after 14 NFL seasons.

"I think anybody with any sense can see how divided we are as a country, and Charlottesville only magnified what we were already seeing," Boldin told The Associated Press by phone Monday.

He was disturbed by the hateful messages directed at African-Americans, Jewish people and the LGBT community during a rally involving neo-Nazis and other right-wing groups in which a counter-protester was killed and two Virginia state police officers died on Aug. 13.

"That's not the America that I want to live in," he said. "And I think the only way that this America changes is that we as a people stand up and change it."

Boldin spoke a day after abruptly informing the Bills he was retiring some two weeks after signing a one-year contract with a base salary of $1.75 million.

The NFL's 2015 Walter Payton Man of the Year, Boldin is no stranger to activism and humanitarian causes. He oversees the South Florida-based Q81 Foundation, which offers educational support for underprivileged children.

He has lobbied for criminal justice reform at the state and federal levels since his cousin was killed by a plain-clothes police officer along the side of a Florida highway in October 2015.

Difficult as it was to walk away from football, Boldin felt he could no longer stand silent on the sideline.

"There's not enough money in this world for me to continue to allow the things that are going on to continue to spread," the 36-year-old father of two boys said.

"I will not feel safe leaving this earth and having my kids have to live in the America that we have today."

Boldin then challenged NFL owners and executives to use their clout to demand change and back many of their players who are already doing so by protesting during the anthem.

"You have your players crying out for help. That's the reason why guys are taking knees during the anthem," he said.

"Just because we're professional athletes doesn't mean we're exempt from the things that go on in society," Boldin said, noting his position as an athlete couldn't save his cousin from being shot.

"If I'm an owner and I see one of my family members — players — hurting, I'd do whatever I can to make sure that my family is OK."

Boldin's decision to retire coincides with what he witnessed during the anthem before Buffalo's preseason game at Philadelphia on Thursday. Eagles defensive end Chris Long showed his support by putting his arm around cornerback Malcolm Jenkins, who stood in silent protest with a raised fist. Bills backup lineman Cameron Jefferson was so inspired by what he saw that he also raised his fist on Buffalo's sideline.

Boldin ranks in the top four among active receivers with 1,076 catches, 13,779 yards receiving and 82 touchdowns receiving.

He spent last season with Detroit, where he had 67 catches for 584 yards and eight touchdowns in 16 games.

The former Florida State star spent his first seven NFL seasons with Arizona, then played three years with Baltimore and three with San Francisco. He helped the Ravens win the Super Bowl in February 2013.

Lions safety Glover Quin credited his former teammate for having the courage for ending his career while knowing he can "have a bigger impact to do something else."

"I tip my hat to him," said Quin, one of several NFL players who joined Boldin in addressing Congress last year. "One day, we'll be able to look back on it and say, 'That was the start of something great.'"

A day later, Boldin feels he made the right choice and pays no mind to those who suggest he simply stick to sports.

"I think it's absurd to tell a person to stick to playing football when the issues that he's talking about are affecting him," he said.

Earlier in the day in an interview on SiriusXM NFL Radio, Boldin said his decision to retire had nothing to do with the Bills trading their top receiving threat, Sammy Watkins, in a pair of blockbuster deals on Aug. 11 , or how the team's offense struggled in a 20-16 preseason loss at Philadelphia.

He also discounted the notion he might reconsider retirement and choose to play for a contender later this season.

"Do I feel like I can still play? Of course," Boldin said. "My passion for the advocacy work that I do outweighs football at this point, so I'm not coming back to play for a contender or to do anything else. I'm done with the game of football."