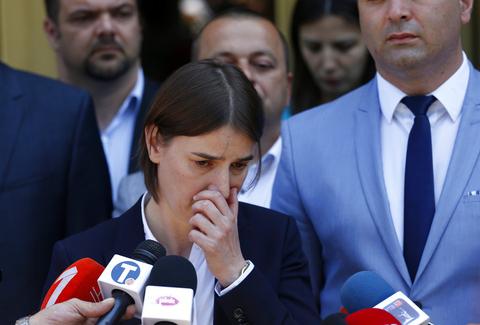 BELGRADE, Serbia (AP) — Serbia's future prime minister on Tuesday proposed a staunchly pro-Russia official as the defense minister, damping hopes in the West that her nomination signaled a shift away from Moscow's influence.

As a government minister, Vulin has called NATO — which bombed Serbia in 1999 over its crackdown against ethnic Albanian separatists — an "evil" organization and has taken part in numerous verbal clashes with officials in neighboring Kosovo, Croatia and Bosnia that fueled ethnic tensions in the Balkans.

Brnabic, who would be conservative Serbia's first female and openly gay government leader, is expected to take office this week after a vote in parliament, which is considered a formality.

When Serbian President Aleksandar Vucic earlier this month nominated the U.S.- and U.K.-educated Brnabic to succeed him as prime minister, it was seen as his attempt to calm Western concerns that Serbia was getting too close to Russia despite its proclaimed goal of joining the European Union.

It was always clear that by nominating Brnabic, who gained no real political experience as local administration minister in Vucic's government, the autocratic leader would retain power from his presidential position, which is formally ceremonial.

"If it's true that Vulin will be the defense minister, whose decision is that?" Vuk Jeremic, a former foreign minister who was a candidate in the April presidential election, told N1 television.

"If this is her choice of people, that is not an encouraging start," Jeremic said.

Serbia, along with Bosnian Serbs, remains the only real Russian ally in the Balkans. The Kremlin has promised to boost Serbia's military and has launched a major propaganda campaign to keep it away from Euro-Atlantic integrations.
_