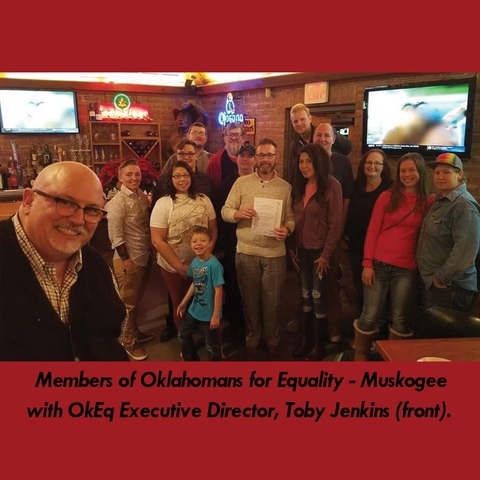 This year marks the 50th anniversary of the Stonewall Riot, and Oklahomans For Equality (OkEq) – Muskogee (Okla) is proud to celebrate by hosting their inaugural Pride Picnic to be held this summer.

RELATED: What started as a riot is now our celebration

“We just started a Pride group last fall through OkEq,” said James Jordan of Muskogee who plans to go and help. “It’s something needed to be done for years, and I’m glad it’s finally happening.”

Jenkins continued, “On June 28, 1969, the New York City Police raided a gay bar called Stonewall just to harass and intimidate the LGBTQ patrons,” Jenkins continued. “It was a common occurrence in those days. However, that particular evening, the patrons of Stonewall resisted arrest, and the LGBTQ people of the neighborhood began to surround the police cars and protest the brutality and constant harassment."

It was the first time LGBTQ people stood up against their oppressors and the systemic discrimination prevalent at the time.

“That one event spurred activism and a grass root organizing nationwide demanding change and equality,” Jenkins added. “Lesbian, gay, bisexual, transgender, queer (LGBTQ+) people around the world continue to face discrimination, violence and sometimes even torture and death because of who they love, how they look or what they are. It is up to all of us in our community to continue to work together towards a world where all people are equal.

“Now it is Muskogee’s turn to join the fight!”

The Muskogee Pride Picnic is July 20 at Honor Heights Park. Organizers say more information on the festivities will be announced as plans are solidified. For information, go to Facebook and search “Muskogee Pride” and check out their event page.

“Raising awareness for equal rights has been a Tulsa tradition, both legally and socially, and we celebrate alongside affirming companies, business organizations and faith communities.”