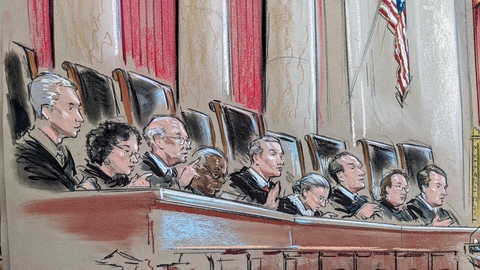 The Supreme Court is turning the final corner, racing to get opinions out to meet its self-imposed end of June deadline to bring a historic term to an end.

More than 20 outstanding cases still linger on a docket interrupted by Covid-19, raising the distinct possibility that the court will continue releasing opinions into July on issues such as LGBT rights, the Deferred Action for Childhood Arrivals immigration program, abortion and President Donald Trump's financial documents.

Extending the unofficial deadline to make up for delays caused by the pandemic would mark another coronavirus-related change at the court. Already the justices broke tradition in May by holding oral arguments over the phone and broadcasting them live.

Giving themselves a few extra weeks could lift pressure during a fraught period when opinion drafts fly between chambers and the court works to resolve the most difficult cases, often left for last.

While the justices take pride in their collegiality on the bench, underlying tensions often seep onto the written page at the end of the term. And with the buildup of controversial rulings, that could be the case again.

Last year, for instance, Justice Elena Kagan did little to hide her fury in a dissent when a 5-4 court held that federal courts must stay out of disputes over claims of partisan gerrymandering. "Of all times to abandon the Court's duty to declare the law, this was not the one," Kagan lamented. "With deep sadness, I dissent."

Here are some of the outstanding cases:

The court has had since November to consider the future of the Obama-era initiative that protects from deportation nearly 700,000 young undocumented immigrants who came to the United States as children.

The Trump administration is trying to phase out DACA, but lower courts have blocked that effort. Plaintiffs -- including the University of California, a handful of states and DACA recipients -- argue that the phaseout violated the Administrative Procedure Act, a federal law that governs how agencies can establish regulations.

The Trump administration appealed the decision to the Supreme Court, and at the time, the President predicted success: "We want to be in the Supreme Court on DACA," he said. Trump has used the lower court rulings to argue against a push for comprehensive immigration revisions, suggesting that if the Supreme Court rules in his favor, Democrats are more likely to make a deal.

One issue that has lingered on the docket since the first sitting in October concerns whether federal employment law that bars discrimination based on sex includes claims based on sexual orientation and gender identity.

Aimee Stephens, the transgender woman at the center of the federal anti-discrimination lawsuit, died in May at the age of 59 after suffering from complications related to kidney disease.

Stephens had worked for six years as a funeral director before announcing that she was transitioning in 2013.

"I have known many of you for some time now," Stephens explained in a letter to her co-workers before stating her decision to have gender reassignment surgery.

"The first step I must take is to live and work full-time as a woman," Stephens said. "I will return to work as my true self," she said, adding, "In appropriate business attire."

At issue is a Louisiana law that requires doctors to have admitting privileges at a hospital within 30 minutes of the facility where the abortion is performed. (The law is on hold pending the appeal.)

It's the first major abortion-related case that President Donald Trump's appointees, Justices Neil Gorsuch and Brett Kavanaugh, have heard while on the bench.

Kavanaugh's place on the court is critical, because it was just four years ago that former Justice Anthony Kennedy joined with the liberal justices to rule against a nearly identical Texas law. Chief Justice John Roberts and Justices Clarence Thomas and Samuel Alito dissented.

In a twist in February 2019 as the Louisiana law was about to go into effect, Roberts stepped in, joining with the liberals, to block it until the justices could consider whether to take up the case.

Now, all eyes will be on Kavanaugh, but also Roberts, an institutionalist who may not be comfortable with such a quick swerve on the issue after a mere four years.

Louisiana argues that the state law is necessary to provide a higher level of physician competence. The Center for Reproductive Rights, representing an abortion clinic and two Louisiana physicians, counters that the law is medically unnecessary and, if allowed to go into effect, will leave "only one doctor to care for every woman seeking an abortion in the state."

For over three hours in early May over the telephone, the court delved into two momentous cases that will determine whether the House of Representatives and a New York prosecutor can subpoena the President's accounting firm and banks for his financial documents.

The justices focused on Trump's effort to shield his documents but they also prodded the lawyers to look into the future and gauge how an eventual decision will impact the separation of powers and the White House's broad claims of immunity.

Trump's attorneys argued that the House subpoenas were "unprecedented in every sense" and asked for "temporary presidential immunity" against the subpoena from a New York prosecutor for the President's tax records.