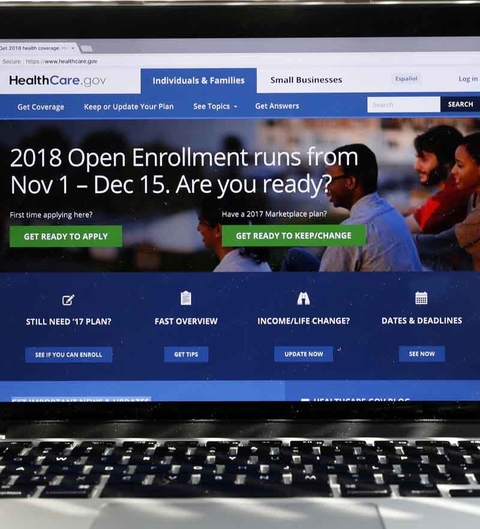 About 8.8 million people have signed up for coverage next year under the Affordable Care Act. Alex Brandon, AP.

Washington - In a remarkably strong show of consumer demand, nearly 9 million people signed up for "Obamacare" next year, as government numbers out Thursday proved predictions of its collapse wrong yet again.

The Centers for Medicare and Medicaid Services said more than 8.8 million people have signed up in the 39 states served by the federal HealthCare.gov website.

That compares to 9.2 million last year in the same states — or 96 percent of the previous total.

The level exceeds what experts thought was possible after another year of political battles over the Affordable Care Act, not to mention market problems like rising premiums and insurer exits. On top of that, the Trump administration cut enrollment season in half, slashed the ad budget, terminated major payments to insurers, and scaled back grants for consumer counselors.

"This level of enrollment is truly remarkable, especially given the headwinds faced by the program," said Larry Levitt of the nonpartisan Kaiser Family Foundation.

Related:
Most Obamacare enrollees could pay less for policies next year
Healthcare costs are high – not using an agent can make them higher
President to stop payment on healthcare subsidies
Healthcare order reflects Trump frustrations

President Donald Trump insistently predicted "Obamacare" would implode as he pursued unsuccessful efforts to repeal it in Congress. This week he incorrectly declared the GOP tax bill had essentially repealed it.

Despite all that, more than 1 million new customers signed up last week, ahead of a Dec. 15 deadline for HealthCare.gov. That's a sign of solid interest in the program, which offers subsidized private health insurance to people who don't have access to job-based coverage.

It's possible that final HealthCare.gov numbers could end up somewhat higher than reported Thursday, partly because late sign-ups in the Midwest and the West have yet to be added in.

The nationwide enrollment total won't be known for weeks, since some states running their own health insurance markets — or exchanges — continue signing up customers through January.

Total national enrollment could wind up near last year's final number of 12.2 million.

"We know anecdotally that many state exchanges are running ahead of last year, (and) we could actually make up the national enrollment deficit with higher state-run exchange enrollment," said Chris Sloan of the consulting firm Avalere Health.

Lori Lodes, a former Obama administration official who once helped direct the enrollment campaign, said it's likely that last week saw the biggest number of sign-ups in the program's history.

That's certain to lead to more criticism of the Trump administration for shortening open enrollment and other actions that Democrats call "sabotage."

"The American people surged to defend this historic law from the cruelty of Trumpcare, and they enrolled at a record pace in quality, affordable health coverage on HealthCare.gov," said House Democratic leader Nancy Pelosi of California.

However, the administration also took other less noticed steps to facilitate enrollment, such as creating an easier path for insurers and brokers to sign up customers.

The strong numbers for HealthCare.gov came a day after Trump proclaimed that the GOP tax bill "essentially repealed Obamacare."

But the tax overhaul only repealed the health law's fines on people who don't carry health insurance, starting in 2019. Other major elements of former President Barack Obama's law remain in place, including its Medicaid expansion tailored to low-income adults, protections for people with pre-existing medical conditions, subsidies to help consumers pay their premiums, and requirements that insurers cover "essential" health benefits.

Bipartisan legislation to shore up insurance markets is pending before the Senate, but its fate is also uncertain.