Shelley Morrison, aka Rosario, of "Will & Grace" fame dies at 83 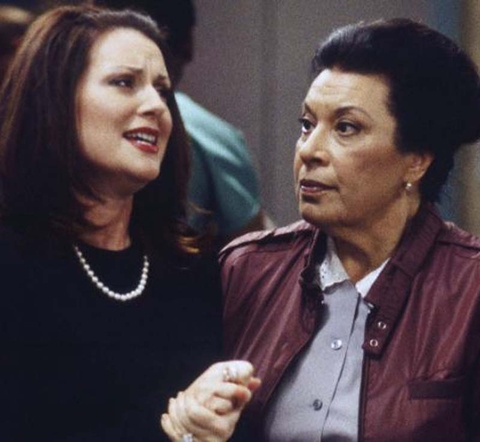 Shelley Morrison as Rosario Salazar, right, and Megan Mullally as Karen Walker in an episode of "Will & Grace" in 2000. CNN photo.

Morrison died Sunday at Cedars-Sinai Medical Center in Los Angeles from heart failure at the age of 83, DeWaal said.

Morrison's character Rosario was the no-nonsense Salvadoran maid to socialite Karen Walker, played by Megan Mullally, in the original run of "Will & Grace" on NBC from 1999 to 2006. Karen was friends with lawyer, Will, and interior designer, Grace, who shared a New York City apartment.

"Rosario is one of my all-time favorite characters," Morrison said in a biography released by her agent. "She reminds me a lot of my own mother, who loved animals and children, but she would not suffer fools."

"It is very significant to me that we were able to show an older, Hispanic woman who is bright and smart and can hold her own," she said.

She was born as Rachel Mitrani on October 26, 1936 in the Bronx to Jewish Spanish parents, according to the biography. Spanish was her first language.

She worked for more than six decades, guest starring in more than 150 television series, according to IMDd.com. Besides her role on "Will and Grace," Morrison was probably best known for playing Sister Sixto on "The Flying Nun" alongside Sally Field in the 1960s.

Some of her roles included a Native American woman in "Mackenna's Gold" in 1969 as well as minor Hispanic roles in movies like "Man and Boy" in 1971 and "Troop Beverly Hills" in 1989.

She'd battled health problems over the years and was a breast and lung cancer survivor.

A statement released by DeWaal said: "Shelley's greatest pride as an actress was in playing the indomitable Rosario, in a comedy series that furthered the cause of social equity and fairness for LGBTQ people. She also took pride in portraying a strong, loving yet feisty Latina character. She believed that the best way to change hearts and minds was through comedy."