The state that is a strange and deeply imperfect LGBTQ pioneer 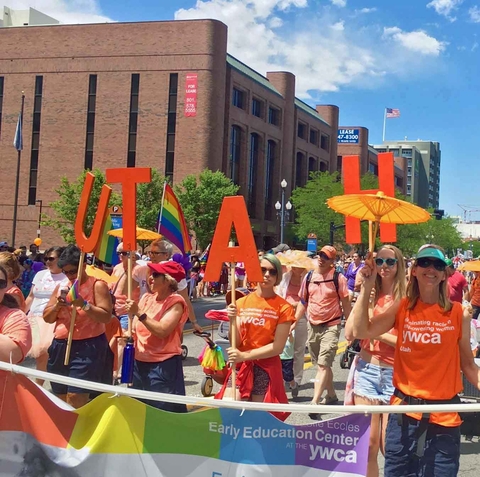 If you want to understand this country's LGBTQ future, look no further than Utah.

From the outside, the Beehive State might seem full of contrasts: Salt Lake City mayor Jackie Biskupski is a lesbian Democrat, but the state legislature is mostly made up of Mormon Republicans. Salt Lake City itself, a thriving cultural hotspot, has one of the largest adult LGBTQ populations in the country by percentage, but the state's large population of homeless LGBTBQ youth speaks to the persistence of prejudice.

In recent political memory, Utah has been unpredictable on LGBTQ issues. In 2015, LGBTQ rights advocates worked with the Church of Jesus Christ of Latter-day Saints on a compromise law that delivered key nondiscrimination protections while clarifying certain religious exemptions. Since then, though, legislative victories have been hard-won: a hate crimes bill was signed into law earlier this year, but a conversion therapy ban failed.

So, is Utah LGBTQ-friendly or not, you might well wonder. There is no easy answer to that question. But what's important is that Utah has been asking itself that question, grappling with it both culturally and politically, however mixed the results. In many ways, Utah is showing the United States what LGBTQ progress looks like away from the coasts: messy, often piecemeal, but deeply necessary.

Utah was one of six predominantly Republican states that I spotlighted in my recent travel memoir Real Queer America: LGBT Stories from Red States," written after a two month-long road trip that I took in the summer of 2017.

The national media still sometimes presents LGBTQ rights and religious freedom as two distinct causes, competing against each other in a zero-sum game. In Utah, no one can pretend like that's the case; LGBTQ people and people of faith, when they don't directly overlap, are too intertwined in each other's lives to go to separate corners. The result of that proximity has been progress -- not progress by leaps and bounds, but progress nonetheless.

Utah is still the most outwardly conservative state to have employment and housing protections for LGBTQ people. That's no small feat, given the lack of progress elsewhere.

Other red states haven't just failed to pass LGBTQ rights legislation; they have actively stonewalled it. Many GOP-controlled state legislatures have instead passed -- or tried to pass -- laws that single out the LGBTQ community for discrimination. (Remember North Carolina's "bathroom bill," partially repealed in 2017?) In all, according to the Movement Advancement Project, 26 states, concentrated in the South and the Great Plains, still don't have any laws on the books that expressly ban anti-LGBTQ discrimination.

In the absence of statewide protections, urban LGBTQ oases like Salt Lake City have cropped up all over red states, much to the surprise of the coastal media: "For real," The Boston Globe declared in 2017, "Salt Lake City is America's super gay, super cool hipster haven." (That would hardly be considered news in Salt Lake itself, where the city's coolness has long been known.) But that's no help to the millions of LGBTQ Americans who live in rural parts of the country, away from the defenses that large population centers can offer.

That's why Utah's stepwise progress on LGBTQ issues matters so much. At a cultural moment when other states are passing -- or trying to pass -- flagrantly discriminatory legislation, Utah has been taking small but meaningful statewide strides toward change. One example: In 2017, the state repealed a so-called "no promo homo" law that barred teachers from discussing homosexuality in a positive light in schools. (Texas, Oklahoma, Louisiana, Mississippi, Alabama, and South Carolina still have such laws on the books.)

When I traveled to Utah to write my book, I wanted to learn what the state was doing right. What was the secret ingredient? What I found were LGBTQ advocates like Equality Utah's Troy Williams, a gay ex-Mormon who sits down with Republican state legislators and tries to build ties, even when the process is frustrating. (Williams candidly told me that the first draft of the 2015 compromise bill was "awful and we really had to fight over it" but he kept coming to the table until it was done.)

I also met devout Mormon parents who were determined to love their LGBTQ children, and to encourage them to live authentically. (One Mormon mother of a transgender son told me about the amazing "shift" she saw in her child, from self-harm to self-love, once he transitioned. That was proof enough of the power of LGBTQ acceptance.)

I came away with the impression that LGBTQ people -- Mormons, Democrats, and Republicans -- were all talking to each other in Utah. The results weren't always pretty, bitter arguments often broke out, and there is still a long way left to go until there is full equality. But the conversations are at least happening -- because they can't help but happen.

The good news is that this could be a preview of things to come throughout the country. According to surveys conducted by the Public Religion Research Institute, Mormons are indeed more progressive on LGBTQ issues than the white evangelical Protestants who pull the GOP to the right on issues like same-sex marriage and transgender rights -- but not by much. As younger generations of religious people, evangelicals included, show support for LGBTQ rights -- a trend that PRRI data backs up -- we should start to see states like Texas and even Alabama heading down the same road that Utah has been paving in recent years. (And maybe one day we'll have a US President who signs LGBTQ federal protections into law.)

In the meantime, Utah is becoming a strange and deeply imperfect LGBTQ pioneer. Its stark contrasts and political unpredictability aren't a sign of a state in an identity crisis; they are simply the growing pains that we can expect the country at large to go through as we move toward full LGBTQ equality.