Supreme Court declines to take up 'Dreamers' case for now 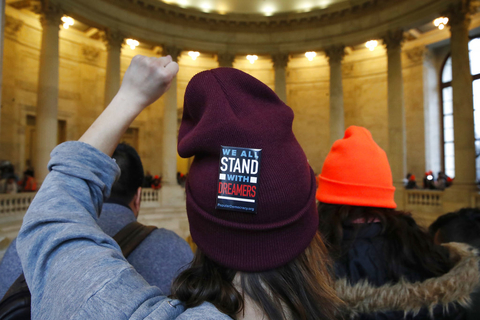 WASHINGTON (AP) — The Supreme Court on Monday rejected the Trump administration's highly unusual bid to bypass a federals appeals court and get the justices to intervene in the fate of a program that protects hundreds of thousands of young immigrants from deportation.

The decision affecting "Dreamers" means the case will almost certainly have to work its way through the lower courts before any Supreme Court ruling is possible. And because that could take weeks or months, Monday's decision also is likely to further reduce pressure on Congress to act quickly on the matter.

The ruling on the Obama-era Deferred Action for Childhood Arrivals program, or DACA, wasn't unexpected.

Justice Department spokesman Devin O'Malley acknowledged that the court "very rarely" hears a case before a lower appeals court has considered it, though he said the administration's view was "it was warranted" in this case.

O'Malley said the administration would continue to defend the Homeland Security Department's "lawful authority to wind down DACA in an orderly manner."

DACA has provided protection from deportation and work permits for about 700,000 young people who came to the U.S. as children and stayed illegally.

Last fall, Trump argued that Obama had exceeded his executive powers when he created the program. Trump gave lawmakers until March 5 to send him legislation to renew the program.

But in recent weeks, federal judges in San Francisco and New York have made Trump's deadline temporarily moot. They've issued injunctions ordering the Trump administration to keep DACA in place while courts consider legal challenges to Trump's termination of the program.

The administration was fighting the judges' rulings in its appeal to the Supreme Court. Yet it has not tried to block the injunctions that force it to continue operating the program.

Congress has struggled to find consensus on the issue. The Senate stalemated on the matter two weeks ago, leaving any further congressional action in doubt.

The Supreme Court rarely hears a case before a lower appeals court has considered it. The fight over whether President Richard Nixon had to turn over the Watergate tapes is one such example.