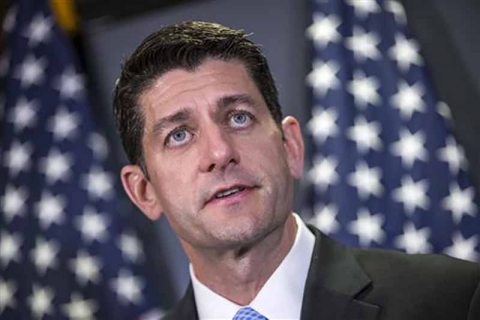 WASHINGTON (AP) — Temperatures and tempers are likely to run hot as lawmakers return to Washington on Monday for an abbreviated 6-week summertime session featuring a handful of must-do legislation and the roll-out of a House GOP campaign agenda that's a priority for House Speaker Paul Ryan.

The spring was a little bumpy for the Wisconsin Republican, yo-yoing between his role as the top elected Republican in the country in the era of Donald Trump and manager of the difficult-to-control House.

Both roles have placed Ryan in difficult spots. He's openly struggled with the Trump phenomenon — endorsing the New York billionaire as the GOP's presumptive nominee last Thursday despite "our differences" — and he's found it difficult to corral wayward conservatives, just as his predecessor John Boehner, R-Ohio, did.

Summertime in presidential election years is often a time when Congress lowers its sights and focuses more on what it has to do rather than testing the limits of what the political thicket will allow.

This summer, that must-do list is short and achievable: Helping Puerto Rico through its fiscal crisis with a July 1 deadline looming for a $2 billion debt payment; funding the battle against the Zika virus; and reauthorizing the Federal Aviation Administration.

Ryan has fulfilled promises for more open House debates, deference to committee chairmen, and a lighter touch with tea party conservatives. But the return to "regular order" has also led to failure on the budget, delays on the Puerto Rico and Zika measures, and a small-bore legislative agenda that's been overshadowed by the presidential campaign.

Ryan will begin to roll out his "agenda project" — a months-long effort to devise a positive vision, message and platform for the party — this week, starting with a speech and proposal on poverty.

"We can keep doing the same things and getting the same results," Ryan said Friday in a video message. "Or instead of trapping people in poverty, we can get them on the ladder of opportunity, reward work, open our economy so everyone can make the most of their lives."

Ryan has a penchant for lofty rhetoric, but his new job also demands a focus on the nuts and bolts of lawmaking, where there are limits to what he can control.

For instance, it's taken weeks for Ryan and others to forge compromise legislation on Puerto Rico that would establish a control board to oversee a limited restructuring of the commonwealth's debt. Puerto Rico missed a May 1 debt payment and a larger July 1 obligation is fast approaching, but the hard-won Puerto Rico legislation appears teed up to pass the House after a bipartisan committee vote last month.

The Senate, both Democrats and Republicans say, is likely to deliver the House bill to Obama without any changes.

"That's a real test for the speaker. He's invested a lot of effort and time in (the Puerto Rico legislation)," said Rep. Tom Cole, R-Okla. "I think he's wise to have done so and I think he will ultimately be successful. You certainly wouldn't want to go home for July break not having got that done. You would certainly like to get Zika done by the July break as well."

However, resolving legislation to fight the Zika virus, passed by both House and Senate in substantially different form, is more complicated. A bipartisan $1.1 billion Senate measure is acceptable to the White House and its Democratic allies, while a $622 million House measure that passed along party lines has attracted a veto threat from the White House as insufficient to fight the virus, which can cause severe birth defects.

Not long ago, a logical split-the-differences compromise to the Senate's spending level, accompanied by spending cuts demanded by House GOP conservatives, might have been a slam dunk. That's still a possible solution, but it could bleed support from both Democrats and Republicans, and presents Ryan with a difficult balancing act. A move by the House to attach an unrelated measure on pesticides permitting requirements is a complicating factor as well.

Meanwhile, a battle over gay rights has upended the appropriations process in the House, which involves 12 annual spending bills for federal agencies. Last month, Democrats succeeded in winning an amendment defending an Obama executive order protecting lesbian, gay, bisexual and transgender people against discrimination by federal contractors. That scuttled the underlying energy and water measure and may lead Ryan to adopt a more closed approach in order to avoid a repeat.

Lawmakers must also pass a measure to reauthorize the FAA. A battle over a House plan to spin off responsibility for air traffic control operations to a private, nonprofit corporation has the House and Senate at an impasse. With the two key House and Senate committee chairmen at loggerheads over the issue, it's commonly assumed that lawmakers would opt to pass a short-term extension of FAA authority that would kick the problem into next year.

In the Senate, Majority Leader Mitch McConnell, R-Ky., has generally played it safe and has had the Senate plug away on bipartisan legislation such as a measure to combat opioid abuse and an effort to revive the moribund process for appropriating annual agency budgets. The opioid legislation is in a House-Senate conference committee and could be ready for final votes before lawmakers leave Washington for the political conventions in July.

ANDREW TAYLOR, Associated Press. Copyright 2016 The Associated Press.
All rights reserved. This material may not be published, broadcast, rewritten or redistributed.
The Gayly - 6/6/2016 @ 2:48 p.m. CDT