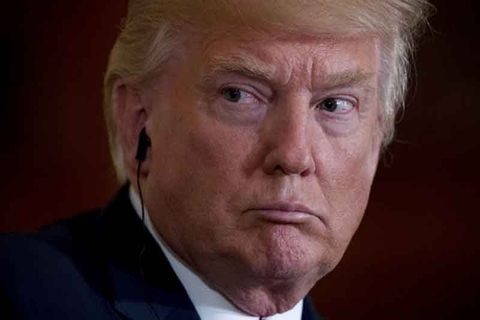 In an interview with The Associated Press, Trump says he is "not after the dreamers, we are after the criminals." He says "that is our policy."

President Barack Obama changed enforcement priorities to protect many young people brought to the country illegally as children from deportation.

Attorneys say 23-year-old Juan Manuel Montes was recently deported to Mexico despite having qualified for deferred deportation. Montes sued Tuesday for access to records on his deportation.

Trump says Montes' case is "a little different than the Dreamer case," though he did not specify why.

President Donald Trump says businesses and individuals will receive a "massive tax cut" under a tax reform package he plans to unveil next week.

In an interview with The Associated Press, Trump says the plan will result in tax cuts for both individuals and businesses. He would not provide details of the plan, saying only that the tax cuts will be "bigger I believe than any tax cut ever."

The president says the package will be released on "Wednesday or shortly thereafter" — just before his 100 day mark in office.

Treasury Secretary Steven Mnuchin initially set a goal of getting tax reform passed by August, but that deadline has slipped. Mnuchin now says the administration still hoped to get a bill passed well before the end of the year.

In an interview with The Associated Press, Trump says he is not explicitly endorsing Le Pen. But he says he believes she will be helped by the attack that left a Paris police officer dead, because she's the candidate who is "strongest on borders, and she's the strongest on what's been going on in France."

France's anti-terrorism prosecutor said Friday the gunman had a note with him defending the Islamic State group.

Trump says he believes the attack will impact how the French people vote in Sunday's first round of voting in the presidential election. He says he's not worried about emboldening terrorists by saying an attack can have an impact on a democratic election.

President Donald Trump says that if China wants to solve "the North Korean problem, they will."

Trump has been pressing China both publicly and privately to ramp up pressure on Pyongyang over its nuclear ambitions.

In a tweet Friday morning, Trump said that China is the "economic lifeline" to North Korea. He conceded that "nothing is easy" regarding the tense situation with Pyongyang.

Trump tweeted Friday, "No matter how much I accomplish during the ridiculous standard of the first 100 days, & it has been a lot (including S.C.), media will kill!"

Since taking office, Trump has managed to get a Supreme Court justice confirmed and is pursuing tougher regulations on immigration. But his health care bill didn't come up for a vote in the House, and his travel ban was blocked in the courts.

Earlier this week, Trump declared that "no administration has accomplished more in the first 90 days."

President Donald Trump says that the latest attack in Paris will have a "big effect" on France's upcoming presidential election.

Trump tweeted early Friday, "Another terrorist attack in Paris. The people of France will not take much more of this. Will have a big effect on presidential election!"

An attacker emerged from a car in Paris Thursday and used an automatic weapon to shoot at officers in the center of the Champs-Elysees. One officer was killed, as was the gunman. The Islamic State group claimed responsibility in a statement.

Candidates in France's presidential election treaded carefully in response to the attack with the first round of voting set for Sunday.

Trump has not expressed an opinion on the upcoming French election, although he was a supporter of the British decision to exit the European Union and has instead stated his preference to one-on-one trade and defense agreements with U.S. allies.

Iran is failing to fulfill the "spirit" of its nuclear deal with world powers, President Donald Trump has declared, setting an ominous tone for his forthcoming decision about whether to pull the U.S. out of the landmark agreement.

As he often had during the president campaign, Trump ripped into the deal struck by Iran, the U.S. and other world powers in 2015 and said "it shouldn't have been signed." Yet he pointedly stopped sort of telegraphing whether or not the U.S. would stay in.

Speaking of the Iranians, Trump said: "They are not living up to the spirit of the agreement, I can tell you that,: although he didn't mention any specific violations.  Earlier this week, the administration certified to Congress than Iran was complying — at least technically — with the terms of the deal, clearing the way for Iran to continue enjoying sanctions relief in the near term.