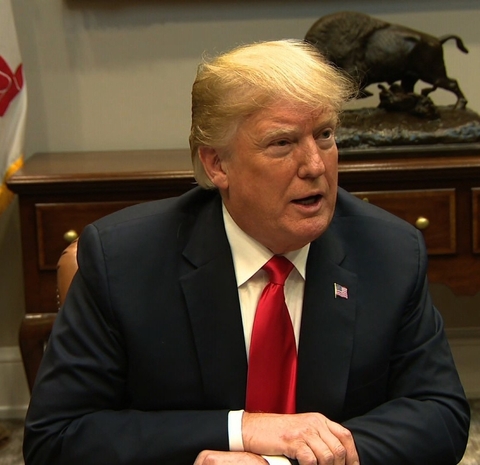 President Donald Trump on Monday ordered the declassification of various documents and text messages related to the Russia investigation, prompting new concerns about the increasing politicization of intelligence materials.

"For reasons of transparency" the President ordered the Justice Department and Office of the Director of National Intelligence to initiate the "immediate declassification" of selective portions of the Foreign Intelligence Surveillance Act application on former Trump foreign policy aide Carter Page, as well as "all FBI reports" prepared in connection with the FISA warrant request, according to statement Monday from White House press secretary Sarah Sanders.

A Justice Department spokesperson said the agency was already working with the ODNI to comply with the President's order.

"When the President issues such an order, it triggers a declassification review process that is conducted by various agencies within the intelligence community, in conjunction with the White House Counsel, to seek to ensure the safety of America's national security interests," the spokesperson said in a statement.

The President has floated the idea of declassification for several weeks, but Monday's statement from the White House was the first time the full breadth of his intentions was articulated, making clear that he expects materials to be released despite the fact that there's an active investigation by special counsel Robert Mueller into any links between his campaign associates and the Russian government.

"The President shouldn't be declassifying documents in order to undermine an investigation into his campaign or pursue vendettas against political enemies," said Virginia Sen. Mark Warner, the top Democrat on the Senate Intelligence Committee. "He especially shouldn't be releasing documents with the potential to reveal intelligence sources."

North Carolina Republican Rep. Mark Meadows, the chairman of the conservative House Freedom Caucus and a close ally of the President, praised the move.

"It's time to get the full truth on the table so the American people can decide for themselves on what happened at the highest levels of their FBI and Justice Department," he tweeted.

Thousands of text messages between Page and Strzok have already been released with redactions for personal information and to protect parts of the ongoing investigation, but publicly releasing them in fully unredacted form could run afoul of the federal privacy law guarding against the disclosure of personal information.

Yet the declassification effort represents only the latest front in the larger partisan struggle over the Russia investigation.

Earlier this year, the FBI clashed with the President over a controversial Republican intelligence memo from House Intelligence Committee Chairman Devin Nunes, which argued that ex-British intelligence agent Christopher Steele, the author of a controversial dossier on Trump and Russia, harbored anti-Trump motivations that were not disclosed in the FISA application and that the FISA court was not told that Steele's dossier was funded through a law firm by the Democratic National Committee and the Hillary Clinton campaign.

Democrats responded with their own memo, which argued that the FBI's interest in Carter Page predated the FBI's knowledge of the Steele dossier. It also argued that it was not the dossier and the Page FISA warrant that prompted the FBI's counterintelligence investigation into Russia, but rather an earlier conversation that former Trump campaign adviser George Papadopoulos had with an Australian diplomat about alleged Russian dirt on Clinton.

Eventually, in a highly unusual move, the FBI released highly redacted versions of the FISA applications in July after news organizations and advocacy groups sued for their disclosure.

But since that time, certain House Republicans have called for the public release of specific pages, even though they have acknowledged they are not sure whether the documents will help or hurt their arguments about alleged improper conduct in the probe.

Their latest effort could backfire and upend the narrative House Republicans have spent months crafting, should the declassified documents confirm the FBI had more than the dossier to justify the surveillance of Page.

The redacted versions of the FISA warrant applications showed that the agency did raise concerns that Page was a target of Russian recruitment and might have been working with the Kremlin. Page has denied the allegations. A footnote also disclosed a political motivation behind the Steele dossier and said the person behind it was likely looking for information to discredit Trump's campaign, but Trump did not order the vast majority of that portion of the October 2016 FISA declassified Monday.

Some 30 members of Congress have reviewed largely unredacted versions of the highly sensitive FISA applications, but several of the most vocal members of the current declassification campaign have not.