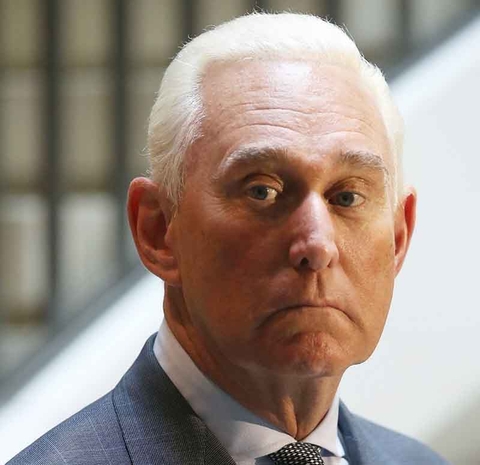 President Donald Trump is embracing a former campaign adviser who stated that he won't testify against him as part of Robert Mueller's investigation, while calling for a "full and complete" prison sentence for his former lawyer, Michael Cohen, who is cooperating with the special counsel.

In a series of tweets, Trump said Monday morning that Roger Stone, a Republican political operative and longtime Trump ally, has "guts" for saying that he won't testify against the President.

"'I will never testify against Trump.' This statement was recently made by Roger Stone, essentially stating that he will not be forced by a rogue and out of control prosecutor to make up lies and stories about 'President Trump.; Nice to know that some people still have 'guts!'" Trump tweeted Monday morning.

Trump's politically charged tweets came as much of the nation's attention was on the late President George H.W. Bush, whose body was being transported from Houston to Washington, DC, to lie in state in the rotunda of the US Capitol until Wednesday morning.

In August 2015, the Trump campaign stated that Stone was fired, after several inflammatory social media posts were publicized. Stone has insisted that he quit.

The President on Monday also called for Cohen to receive "a full and complete sentence" for crimes he has pleaded guilty to.

"'Michael Cohen asks judge for no Prison Time.' You mean he can do all of the TERRIBLE, unrelated to Trump, things having to do with fraud, big loans, Taxis, etc., and not serve a long prison term?" Trump tweeted, adding, "He makes up stories to get a GREAT & ALREADY reduced deal for himself, and get [...] his wife and father-in-law (who has the money?) off Scott Free. He lied for this outcome and should, in my opinion, serve a full and complete sentence."

It was revealed last week that Trump spoke more extensively during the presidential election with Cohen about the proposed Trump Tower project in Moscow than Cohen admitted to Congress last year, which Cohen said while pleading guilty Thursday in federal court to a charge from Mueller's office. Cohen, who famously once declared he would "take a bullet" for Trump, is cooperating with Mueller and has spoken with the special counsel's office for more than 70 hours on topics beyond Moscow, a source with knowledge of the discussions told CNN.

Trump has dismissed the significance of the finding.

CNN also reported Friday that Cohen was under the impression Trump would offer him a pardon in exchange for staying on message in support of the President in discussions with federal prosecutors, according to two sources.

In his tweets Monday morning, the President once again castigated Muller, writing, "Bob Mueller (who is a much different man than people think) and his out of control band of Angry Democrats, don't want the truth, they only want lies. The truth is very bad for their mission!"