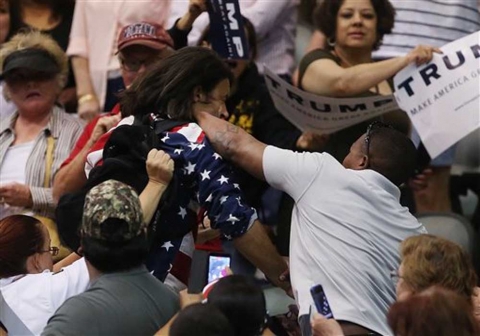 Donald Trump's campaign in Arizona is centered on his hard line against illegal immigration. Photo by Mike Christy, Arizona Daily Star via AP.

TUCSON, Ariz. (AP) — Donald Trump's campaign in Arizona is centered on his hard line against illegal immigration, a stand that supporters embraced in a series of tense rallies ahead of Tuesday's presidential primary in the border state.

Both in Phoenix and Tucson, Trump was introduced by former Arizona Gov. Jan Brewer, who pushed tough immigration laws in office, and Joe Arpaio, the Maricopa County sheriff who made his name by chasing down people who are in the country illegally. The county includes Phoenix and nearly two-thirds of Arizona's population.

Protesters showed up at every event. In Phoenix, they blocked the main road into his outdoor rally for several hours before it started. In Tucson, they interrupted him and some were tossed from the event. Police said Sunday that about half a dozen were arrested at the Arizona rallies, including two on misdemeanor charges of assault.

Trump treated the latest protests with a mix of pacifist rhetoric and a mocking tone. "We love our protesters, don't we?" he asked. As security removed one or more, he said: "We want to do it with love," then added bitingly, "Get 'em outta here."

In Tucson, one protester carried a sign with an image of a Confederate flag over an image of Trump; another wore a Ku Klux Klan-style sheet. A man in the crowd attacked the protester with the Confederate sign, kicking and punching him before being arrested. The protesters were led out by security.

"It was a tough thing to watch," Trump said Sunday on ABC's "This Week," adding, "But why would a protester walk into a room with a Ku Klux Klan outfit on?"

Trump made clear, though, "We don't condone violence."

The chairman of the Republican National Committee, Reince Priebus, told ABC that "as far as everyone getting involved in the crowds, leave it to the professionals" in law enforcement.

As the rally attendees later streamed out of the Trump rally, protesters hurled two water bottles at them and called them racists.

Standing in front of a tall, steel fence that divides the two countries, the Vermont senator promised to keep immigrant families together by taking more steps than President Barack Obama has done to protect many from deportation. Sanders called Arpaio a bully and he bemoaned the "divisive, bigoted and xenophobic comments of people like Donald Trump."

Tempers flared at Trump's large gathering in Phoenix, but without the violence that marred his event in Chicago a week before.

For hours, about two dozen protesters parked their cars in the middle of the main road to the event, unfurling banners reading "Dump Trump" and "Must Stop Trump," and chanting "Trump is hate." Traffic was backed up for miles, with drivers honking in fury.

The road was eventually cleared and protesters marched down the highway to the rally site, weaving between Trump supporters who booed and jeered them.

Trump supporter Geroy Morgan, 62, made it to the rally but was furious at the demonstrators, some of whom still stood around after the event ended.

"We come here, the silent majority, to express our opinions," Morgan said. "They don't have any permits or rights."

David Nelson, 62, had to walk about four miles to the rally because demonstrators had blocked the road. "You don't see me at Bernie's disrupting their crowd," he said, referring to Sanders. "I give them respect."

Associated Press writers Astrid Galvan in Tucson, Nicholas Riccardi in Phoenix and Vivian Salama in Washington and contributed to this report.

By Ryan Vanvelzer and Jacques Billeaud. Copyright 2016 The Associated Press.