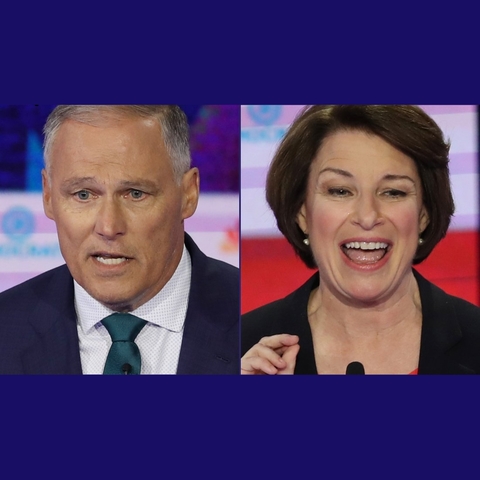 The two Democratic presidential hopefuls unveiled their education proposals Friday ahead of their appearances at the National Education Association presidential forum in Houston.

Both plans seek to roll back some of the Trump administration's education policies.

Klobuchar's proposal would end the Trump administration's push for a school choice tax credit, which critics say would siphon funds from public schools. Inslee says he will end the diversion of federal funds to private charter schools.

They both promise to fully fund the Individuals with Disabilities Education Act and to provide protections for the LGBTQ community.

Last month, Klobuchar had released a long list of wide-ranging priorities for her first 100 days in office if she's elected, including a number of these education proposals.

RELATED: What would a 'Medicare for All' policy mean?

In her policy released Friday, she is proposing a federal-state partnership program under which states would tackle education funding equity and recommend how school services can better meet the needs of working parents. The program would also establish a way for states to distribute federal funds equally to improve schools' infrastructure.

In keeping with the focus of his campaign, Inslee's education proposal includes a climate change component.

"The Department of Education has a critical role to play in ensuring our education system is preparing students at every level to help solve the climate crisis," Inslee said.

He supports giving federal funds to districts that switch to zero-emission buses and investing in climate change education and STEM programs at K-12 schools and historically black colleges and universities.

Like Klobuchar, Inslee wants to ban the use of federal funds to arm teachers or for firearms training -- taking the opposite approach of the Trump administration. He would also pass a national Extreme Risk Protection Order law, temporarily removing firearms from individuals who pose a threat to others or themselves, and would fund federal gun violence prevention research.

Inslee's plan does not include free tuition for public colleges as do the education proposals of Sens. Bernie Sanders of Vermont and Elizabeth Warren of Massachusetts.

"Students have different needs. Children of millionaires have less needs than children who live in poverty. We focused on giving those who really have a need get what they need," Inslee told CNN on Friday. "But we have succeeded in making sure that if you want to go to college, you can do that."

Klobuchar has previously expressed support for free community college and expanding financial aid for low-income students -- but is against making all public colleges free.

"I am not for free four-year college for all, no," Klobuchar said in February at a CNN town hall, adding, "If I was a magic genie and could afford to give that to everyone I would."

Both candidates have parents who were educators; Klobuchar's mother was a second-grade teacher, while Inslee's father was a high school teacher and counselor.

"As the daughter of a teacher and union member, Senator Klobuchar understands that a good education is a basic right of every child and that all Americans should have the educational opportunities they need to succeed in today's economy," Klobuchar's policy release read.