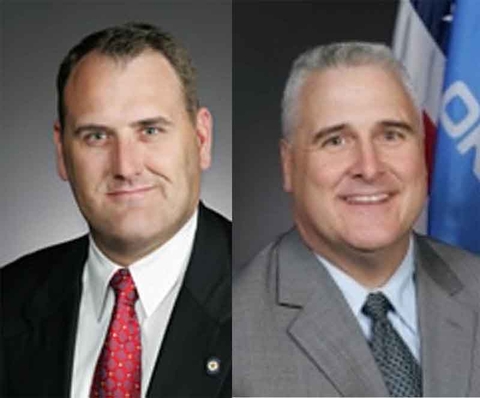 The Oklahoma Legislature continues to seek a way to fix a $215 million shortfall in its budget, caused mainly by actions taken by the Oklahoma Supreme Court. On Monday, GOP Gov. Mary Fallin, and the leaders of the GOP majorities in the House and Senate, announced a party plan to fix the budget.

Trouble is, they need Democratic votes to pass the budget, because bills that raise taxes must be passed by a three-quarters vote in both houses. The GOP does not hold three-quarters of the seats in the House.

Democrats aren’t buying the GOP plan, because it leaves threats to cut mental health and substance abuse services from the state, and because the plan didn’t increase the Gross Production Tax (GTP) on oil and gas producers. That lead to charges that the GOP was trying to balance the budget on the backs of the little people, while leaving wealthy petroleum producers without an increase.

It has left the special legislative session called to fix the budget at a stalemate.

Today, the Senate showed that it could come up with a bipartisan plan. They approved a resolution asking the House to add a GPT increase to the budget bill.

Senator Mike Schulz, the GOP President Pro Tem of the body, said in a statement: “To deliver teachers a $3,000 pay raise and to prevent massive cuts to mental health and other health care services, the Oklahoma Senate in a bipartisan vote approved a resolution Thursday requesting the House of Representatives amend the budget deal to include an increase in the gross production tax of oil and natural gas.

“The Senate resolution asks the House to amend the budget agreement bill (HB 1035X) to include an increase in the gross production tax on new oil and gas wells to four percent for a period of 36 months.”

“Adding GPT to the budget deal certainly wasn’t my first choice, but if it breaks the stalemate it is an option we have to pursue. We now have an opportunity to deliver on teacher pay raises, stop massive budget cuts to health care, and eliminate the constant budget problems plaguing our state. I’m grateful my Democratic and Republican colleagues in the Senate showed leadership in approving this compromise to move Oklahoma forward. We’re hopeful our colleagues in the House will act quickly and join us in solving this problem.”

Senate Democratic Leader John Sparks, said: “This is the time for leadership, real compromise and a long-term plan of action for Oklahoma and its people. We are committed to working together with the Governor and Senate and House leadership toward a resolution that benefits all Oklahomans.”