How Celine Dion became the queen of couture week 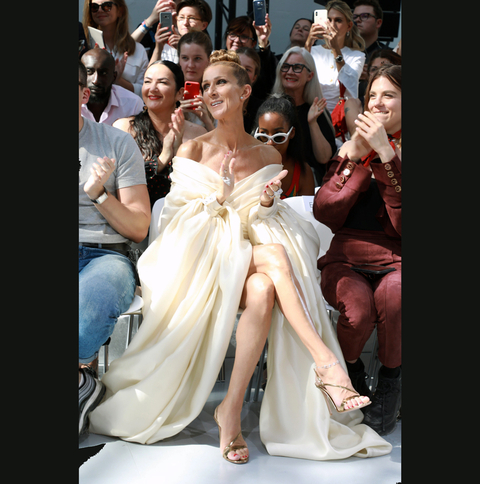 Céline Dion made the streets of Paris her own personal runway in celebration of the city's Fashion Week. Photo: Pierre Suu

Forget the influencers and ignore the models. Celine Dion is the undisputed queen of couture week.

The Canadian songstress has rocked a number of dramatic looks since the start of fashion's most rarefied event, turning heads and attracting photographers as she made Paris her personal catwalk.

Dion made her first appearance of the week in a Chanel unitard, complete with a chain logo belt, casting herself as a modern-day Catwoman while nailing the athleisure trend. A feathered, millennial pink Attico bustier, asymmetric jeans by Ksenia Schnaider and a furry Fendi bag followed. Then there was an Off-White graffiti-print bodysuit and blazer ensemble (no pants) originally modeled by Gigi Hadid. And this was all before Dion even began attending the shows.

At Miu Miu's presentation, the star chose a hot pink strapless ruched number with a big black bow by the brand that was a bold, swoon-worthy showpiece. At Schiaparelli, she wore a custom halter-necked dress by the maison's new creative director, Daniel Roseberry, along with a headpiece by milliner Stephen Jones.

At Iris van Herpen, she was a walking optical illusion in a 3D printed gown from the designer's 2019 couture collection, and for Alexandre Vauthier, she wore an ivory off-the-shoulder mini dress with oversized balloon sleeves of his design, epitomizing sartorial grandeur.

Oh, and did we mention the '80s-inspired Ronald van der Kemp dress -- complete with yellow tutu skirt and tuxedo jacket top -- she wore to stroll the alleys of the French capital?

This level of glamour is nothing new for Dion, who has been at it for the last few seasons. In 2016, appearing at Paris Couture Week for the first time in 11 years, Dion stepped out wearing a trendy oversized Vetements Titanic hoodie that had the fashion crowd swooning and made her into an unexpected style icon in the circuit. Ever since then, the 51-year-old has donned some jaw-dropping looks, from $26,000 head-to-toe Balmain ensemble to a striking Roberto Cavalli floral pantsuit.

She's also revealed an enthusiastic love for fashion that's won the industry over. Sitting front row at the Giambattista Valli show in 2016, she whooped her way through as if it were a football game.

In July 2017, she modeled the latest couture off the Paris runways in a video for Vogue, dancing, singing and just being unabashedly cool, quirky and carefree. Last January, she wept watching the Valentino haute couture show.

No one quite saw Dion's style transformation coming: the singer has always been more revered for her ballads than her wardrobe. But the admiration for her transformation runs deep.

This is due in part to the fact that Dion's reinvention -- which she's achieved with the help of former "image architect" Law Roach and current stylists Pepe Muñoz and Sydney Lopez -- came after the loss of her husband, Rene Angélil, and brother Daniel, who died of cancer within two days of each other in 2016. In light of those circumstances, her fashion rebirth takes on more mature, personal tones.

But there's more to it than that. With her bold choices, Dion has established herself as a true risk-taker who clearly enjoys and has fun with fashion -- something that's increasingly hard to come by as trends skew toward the minimal and cynical. Dion looks like she's having the time of her life.

Watching her Paris adventures, one has to wonder whether Dion has always been a fashion icon in the making. Whatever the case, we're certainly glad she's taken her place in the spotlight.