Juneau says she would change discourse on gays & lesbians 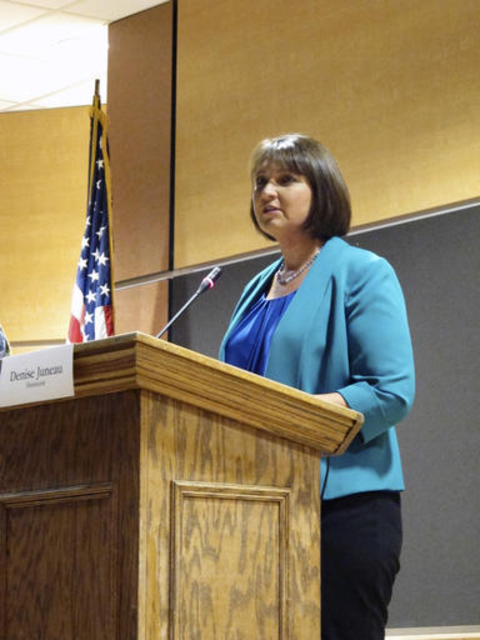 GREAT FALLS, Mont. (AP) — Montana's first openly gay federal candidate said Wednesday that electing her to Congress would be a historical event that could change the discourse about gay, lesbian, bisexual and transsexual people.

Denise Juneau, a Democrat, made her comments near the end of a debate against incumbent Republican U.S. Rep. Ryan Zinke and Libertarian Rick Breckenridge that also touched on issues such as gun rights and agriculture.

Juneau, the outgoing superintendent of public instruction, and Zinke, who is seeking a second term, have met in two other debates. However, the question of the candidates' attitudes toward protections for gays and lesbians had not been previously asked.

"That's an awesome question for me," Juneau said. Montana hasn't elected a woman to Congress in a century, a Native American woman has never served in Congress and the state has never had an openly gay federal candidate, she said.

Electing her to Congress would replicate what happened in the Montana Legislature when more American Indians were elected to office, she said. There, stereotypes broke down and policy discussions changed, she said.

Zinke said in his response that people have the right to freedom of religion and freedom of expression, and it's not his right to dictate how people think or what they do.

Breckenridge, in his response, said he welcomed Juneau to the Libertarian Party. "We've only been advocating that since 1971," he said.

Juneau and Zinke disagreed on a bill to prevent suspected terrorists on the no-fly list from possessing guns, with Juneau supporting the measure and Zinke against it.

Juneau also told the agriculture-friendly crowd that she is against the Trans-Pacific Partnership trade agreement, but that Zinke voted to fast-track the trade agreement. Zinke disputed that, saying the measure he voted for allowed people to see what was in the deal, and he added the deal likely would not be approved without re-opening negotiations.

Zinke repeated his accusation that Juneau has been lying about his record in Congress, while Juneau repeated her assertion that Zinke's ambition for higher office makes him a poor choice to represent the state in the U.S. House.

Zinke, 54, was a Navy SEAL for 23 years and served in the Montana Senate representing northwestern Montana. He was an early supporter of Donald Trump's presidential campaign, and he spoke on national security at the Republican National Convention last summer.

Juneau, 49, is a member of the Mandan and Hidatsa tribes who was raised in Browning on the Blackfeet Indian Reservation. She has served two terms as Montana's superintendent of education, becoming the first Native American woman to be elected to statewide office.

The last Democrat Montana voters sent to the U.S. House of Representatives was Pat Williams from 1994 to 1997.

Breckenridge, 57, previously ran unsuccessfully for the Montana Republican Party chair and was the chairman of the Lake County Republican Central Committee. He replaced Mike Fellows as the Libertarian Party candidate after Fellows died in a car crash last month.