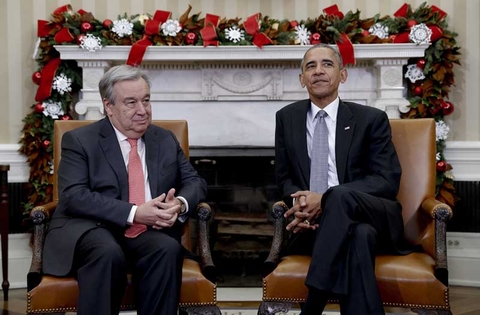 The former Portuguese prime minister and U.N. refugee chief told reporters after being sworn-in as secretary-general on Dec. 12 that he will engage all governments. AP photo by Carolyn Kaster.

UNITED NATIONS (AP) — Antonio Guterres took the reins of the United Nations on New Year's Day, promising to be a "bridge-builder" but facing an antagonistic incoming U.S. administration led by Donald Trump who thinks the world body's 193 member states do nothing except talk and have a good time.

The former Portuguese prime minister and U.N. refugee chief told reporters after being sworn-in as secretary-general on Dec. 12 that he will engage all governments — "and, of course, also with the next government of the United States" —  and show his willingness to cooperate on "the enormous challenges that we'll be facing together."

But Trump, with his "America First" agenda, has shown little interest in multilateralism, which Guterres says is "the cornerstone" of the United Nations.

So as Guterres begins his five-year term facing conflicts from Syria and Yemen to South Sudan and Libya and global crises from terrorism to climate change, U.S. support for the United Nations remains a question mark.

And it matters because the U.S. is a veto-wielding member of the U.N. Security Council and pays 22 percent of the U.N.'s regular budget and 25 percent of its peacekeeping budget.

Immediately after the United States allowed the Security Council to condemn Israeli settlements in the West Bank on Dec. 23 in a stunning rupture with past practice, Trump warned in a tweet: "As to the U.N., things will be different after Jan. 20th," the day he takes office.

Trump followed up three days later with another tweet questioning its effectiveness. "The United Nations has such great potential but right now it is just a club for people to get together, talk and have a good time. So sad!"

John Bolton, a conservative Republican and former U.S. ambassador to the United Nations, said in an interview with The Associated Press that Guterres would be well advised "especially given the incoming Trump administration" to follow the model of his predecessor, Ban Ki-moon, and do what member governments want.

If he tries to follow what Ban's predecessor, Kofi Annan, did as secretary-general and try to be the  world's top diplomat and what some called "a secular pope," Bolton said, "I think especially in the Trump administration, he would run into big trouble very quickly."

Guterres has made clear that his top priority will be preventing crises and promoting peace.

In the first minute after taking over as U.N. chief on Sunday, Guterres issued an "Appeal for Peace." He urged all people in the world to make a shared New Year's resolution: "Let us resolve to put peace first."

"Let us make 2017 a year in which we all — citizens, governments, leaders — strive to overcome our differences," the new secretary-general said.

He has said there is enormous difficulty in solving conflicts, a lack of "capacity" in the international community to prevent conflicts, and the need to develop "the diplomacy for peace," which he plans to focus on.

Guterres has said he will also strive to deal with the inequalities that globalization and technological progress have helped deepen, creating joblessness and despair especially among youth.

"Today's paradox is that despite greater connectivity, societies are becoming more fragmented. More and more people live within their own bubbles, unable to appreciate their links with the whole human family," he said after his swearing-in.

Guterres said the values enshrined in the U.N. Charter that should define the world that today's children inherit — peace, justice, respect, human rights, tolerance and solidarity — are threatened, "most often by fear."

"Our duty to the peoples we serve is to work together to move from fear of each other, to trust in each other, trust in the values that bind us, and trust in the institutions that serve and protect us," he said. "My contribution to the United Nations will be aimed at inspiring that trust."

Guterres won the U.N.'s top job after receiving high marks from almost every diplomat for his performance in the first-ever question-and-answer sessions in the General Assembly for the 13 candidates vying to replace Ban, whose second five-year term ends at midnight on Dec. 31.

In an interview during his campaign with three journalists, Guterres said the role of secretary-general should be "an honest broker, a consensus builder" who engages as much as possible, in many circumstances discreetly.

"It's not just to have a personal agenda, because it would be regrettable or ineffective, or to appear in the limelight. No. On the contrary, it's to act with humility to try to create the conditions for member states that are the crucial actors in any process to be able to come together and to overcome their differences," he said.

Whether the Trump administration will join Guterres and U.N. efforts to tackle what he sees as "a multiplication of new conflicts" and the myriad problems on the global agenda remains to be seen.

Trump's choice as U.S. ambassador to the United Nations, Nikki Haley who is the governor of South Carolina, has a reputation as a conciliator, which could be very useful especially in dealing with the Security Council and the four other permanent veto-wielding members — Russia, China, Britain and France, all of whom have their own national agendas.

But she will be taking instructions from the president.

Richard Grenell, who served as U.S. spokesman at the U.N. during President George W. Bush's administration and has been working with Trump's transition team, downplayed the prospect that Trump will withdraw from or even disregard the United Nations.

He said in an AP interview earlier this month that Trump is talking about reforming the U.N. and other international organizations so "they live up to their ideals."

Guterres also wants to reform the United Nations to make it "nimble, efficient and effective." He said "it must focus more on delivery and less on process, more on people and less on bureaucracy," and ensure that the more than 85,000 U.N. staff working in 180 countries are being used effectively.