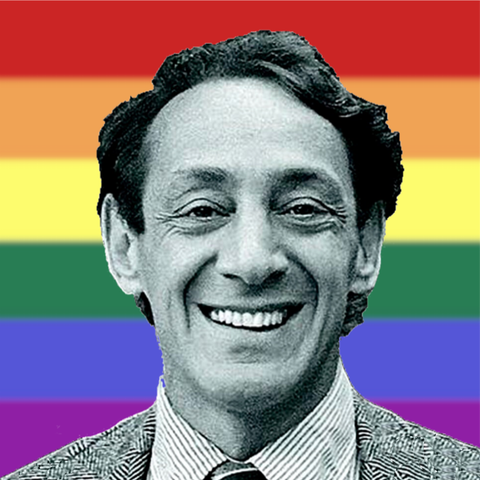 Harvey Bernard Milk was the first openly gay publicly elected official in California. He served for only 11 months before he was assassinated.

His career of service began in the Navy, but he resigned after questions about his sexuality. He didn’t enter politics until he moved to San Francisco in the early 1970s.

Milk’s politics were ferociously local. He established himself as the unofficial Mayor of Castro Street. He ran for office three times and lost, but gained a following from gays, lesbians, the elderly, union workers, and people of color. He won on the fourth try -- a seat on the Board of Representatives as a Representative for District 5.

Milk was a charismatic public speaker and a believer in coalitions, calling disenfranchised communities the “Us’es” and encouraging the merging of minorities, gays, women, and rank-and-file labor. During his time in office, he fought for rent control, the rights of seniors, and limiting the building of high-rise developments. He voted in support for a voting machine that facilitated voting for non-English speaking citizens.

He proposed a gay rights ordinance that prevented San Francisco residents from being fired for being openly gay. It passed!

He fought for a civilian board to oversee police activity and became the face of opposition to proposition 6, which would have allowed openly gay public school teachers to be fired.

Milk’s speech opposing prop 6 called on president Carter for support. Proposition 6 was defeated in the polls and Milk continued to urge his gay supporters to come out of the closet to everyone they knew as a way to dispel myths about the community.

He was killed by Dan White, a disgruntled former colleague and ex-police officer. The night of his murder, thousands of gay people flooded the Castro with candles in a silent procession.

The trial was controversial – jury makeup did not include gay people or people of color. White was charged of first-degree murder but convicted of voluntary manslaughter.

The night his sentence was announced, a crowd took to city hall in protest. One of the most high-profile expressions of anger in the community was Stonewall.

Because of the hate that Milk received during his high-profile life, assassination was often on his mind. He recorded versions of a message to be played “In The Event Of My Assassination.”

In one of the tapes, he is quoted as saying “If a bullet should enter my brain, let that bullet destroy every closet door.”

Milk’s life and death inspired countless men and women across the United States to come out.

Story from video, Harvey Milk: The Pioneer Politician via CNN.