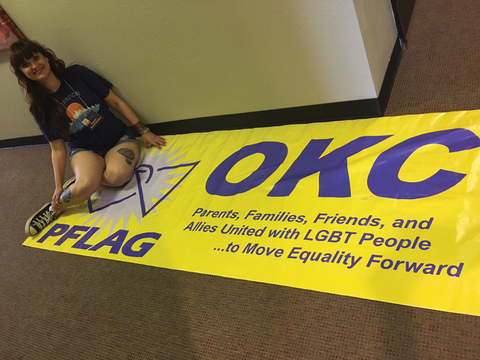 On KFOR’s December 10 edition of Flash Point, Kirk Humphreys used a media platform that few others have, to propagate hate, intolerance and homophobia as he equated homosexuality with pedophilia.
Read: Former OKC Mayor Blames homosexuality for moral decline.

Free speech does not mean speech free from costs and consequences, which in this case will be borne by LGBTQ people, with impacts reaching into other vulnerable minority populations.

Members of our queer community, especially our youth, die when the people around them dehumanize them. The same is true of our black community, which is losing young men and women to violence at an alarming rate, with transgender women of color being at particular risk.

Read: Is Humphreys apology too little, too late?.

With killings at a 10-year high, we cannot disregard any factors contributing to an environment of ignorance and indifference.

Humphreys holds leadership positions on the OU Board of Regents, the board of John Rex Elementary School and OG&E’s Board of Directors. His performance clearly demonstrates that he is not worthy of these appointments and cannot be trusted to discharge his responsibilities in a respectful, inclusive and affirming manner.

Despite a disavowal by OU board of regents he continues to serve on the board. OG&E has not even commented. Only the Oklahoma City Public School Board has called for his removal from the John Rex board.

Read: OKCPS Board Chair, others ask for Humphreys resignation.

PFLAG Oklahoma City calls on all its members and allies to demand accountability. Given the lack of will, integrity and leadership demonstrated by OG&E and OU, we must insure that Humphreys is held accountable for his hate speech. The OU Board of Regents is ignoring 120 people who attended their meeting last week in protest, and OG&E’s silence is telling.

Call, write, email, and even show up to their locations. Let them know that they’re weak – or in the case of OG&E, non-existent – responses are not acceptable. To be leaders in this community, they must be accountable to the people they serve.

PFLAG Oklahoma City is committed to improving the lives of LGBTQ people, their family, and friends through positive peer support, education, and self-directed advocacy. Support groups meet the 2nd Tuesday of every month at 4001 N. Classen, Suite 200, OKC, OK 73118. All Are Welcome.