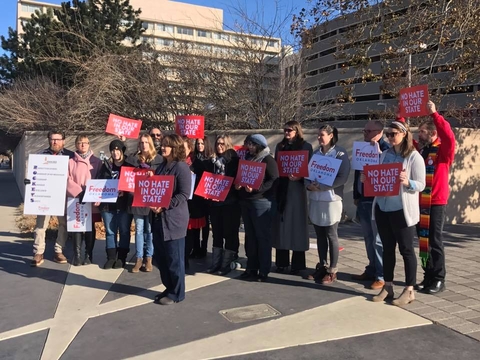 Today, Freedom Oklahoma held a press conference with Paula Lewis, OKCPS Board of Education Chairwoman, and parents speaking out against the homophobic comments made by former Oklahoma City Mayor Humphreys.

Freedom Oklahoma said dozens of outraged parents from John Rex Elementary School contacted them. Their outrage is a result of Humphreys statements and his position on their school board.

Where it all began: Former OKC Mayor blames homosexuality for moral decline

“To spew hate against the ones he has sworn to protect is unacceptable,” said Maggie Howell-Dowd, parent of a student who attends John Rex. “There is a list of eight expectations for behavior taught to all students, Pre-K through fifth grade. One of them is to value one another as unique and special individual, which even he can’t follow.”

Howell-Dowd and her family have been involved with John Rex since its foundation four years ago. “We’re proud to be a part of an ethnically diverse school setting.  It’s good to feel safe, accepted, and focused on kindness.”

She and her wife moved to Oklahoma 15 years ago. “We raised our child here. It’s my kid; it’s our kid, there’s no room for people who feel this way on our school board.”

“There is a huge push on social media for parents to write letters and emails before the next board meeting in February.” Humphreys seat on the John Rex board is a result of his position on the OU Regents Board.

Humphreys was a no-show at a meeting of the Board of OU Regents: Humphreys absent from OU Regents meeting

“There’s a lot of pressure that has to be placed; there’s pressure mounting. OG&E wants him off, many large boards pressuring him off.”