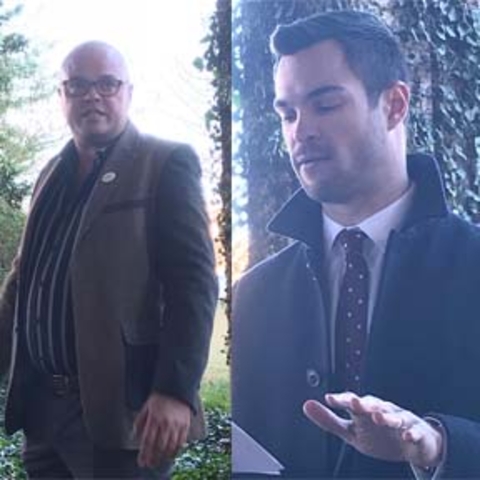 Today, in a regularly scheduled meeting of the Oklahoma University (OU) Board of Regents, members simply said, “Be patient,” on any action they plan to take regarding anti-gay comments said publicly by Regent Kirk Humphreys.

Humphreys was absent from the meeting.

“It is unfortunate that the OU Board of Regents refused even to acknowledge the dozens of students attending their meeting in protest,” said Troy Stevenson, executive director of Freedom Oklahoma. “Freedom Oklahoma will be reaching out to university donors, and we are prepared to call for a widespread boycott of the University until Regent Humphreys either resigns or is removed.”

On Sunday, Humphreys expressed his contention with “homosexuals” in the KFOR broadcast of Flashpoint. Using Barney Frank as an example, he indicated homosexuality could be compared to pedophilia and that homosexuality has led to moral decline.
Read: Former OKC Mayor Blames homosexuality for moral decline

Before the meeting, a group of OU students hosted a peaceful event in front of the location where the Board of Regents meets in order to garner support encouraging the Former Mayor to resign from board.

In a statement, the students said, they “will not tolerate bigotry.”

Earlier today, Oklahoma City Public School Board Chair Paula Lewis called for the resignation of Kirk Humphreys from the John Rex Charter Elementary Board after his comments on Sunday about the LGBTQ community.

“The comments from Kirk Humphreys go against our school district’s values of inclusivity and equality. We believe there is strength in our diversity.”
Read full statement and more here: OKCPS Board Chair, others ask for Humphreys resignation

Tulsa’s Oklahomans for Equality said they are ‘appalled by remarks made by Humphreys.’

“Humphreys is slated to be the chairman of the OU regents in 2018-19. As such, he will play a large role in selecting the university's next president.”

Love’s Travel Stops, who sponsors Flashpoint, said in a social media statement that they are an inclusive company and Humphreys statements are not consistent with their beliefs. “We are taking this matter seriously and are assessing the future of our sponsorship of this program.”