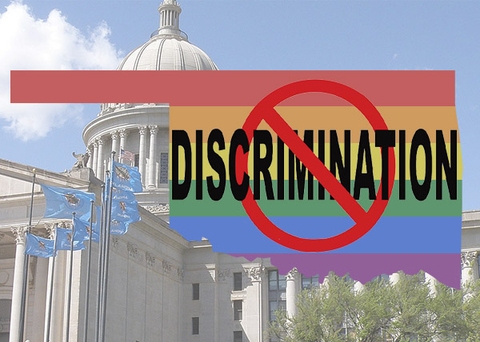 SB1140, a bill that would allow religious-based adoption agencies to discriminate against same-sex couples, single people and non-Christians passed in the Oklahoma House of Representatives today.

The bill made it through the Senate and in the Oklahoma House Judiciary Committee.

Several dismissive answers were given by Rep. Dunlap (R), but a simple answer was not provided. Rep. Dunlap (R) offered to have that discussion with Rep. Proctor (D) off the House floor.

The bill passed in Committee after Rep. Osborn (R) introduced an amendment to deny state and federal funding to any agency that discriminates. 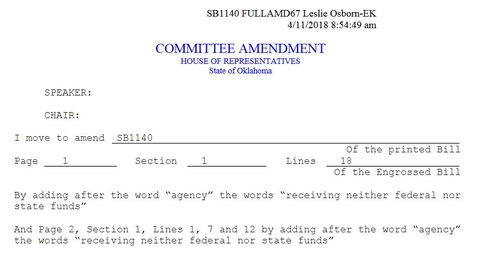 Representative Walke also introduced several amendments in an attempt to quash the bill.

Rep. Humphrey (R) then motioned to suspend the rules, the motion was denied since it did not receive 2/3 vote.

Rep. Osborn's amendment to deny state and federal funding to any child placing agency that discriminates remains in place. 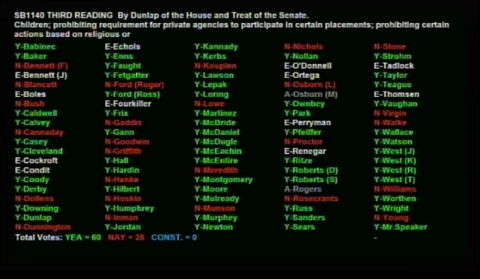 "To the extent allowed by federal law, no private child placing agency shall be required to perform, assist, counsel, recommend, consent to, refer, or participate in any placement of a child for foster care or adoption when the proposed placement would violate the agency's written religious or moral convictions or policies," Section one of SB 1140. Read the full bill here.

It will now go to conference where it could be amended back to its original language.

The bill would then be on its way to Gov. Fallin's desk.