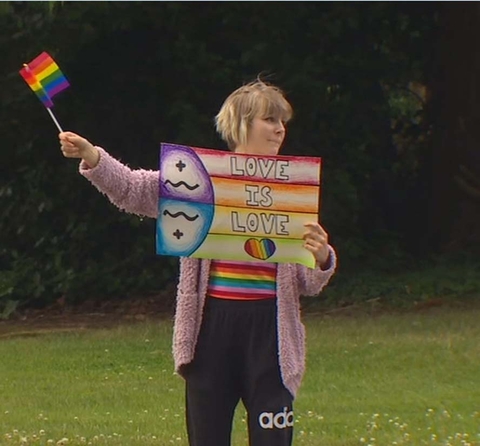 Protestor outside the Firs Camp in Washington State. File photo.

Protesters gathered outside the Bellingham, WA summer camp that fired one of its counselors when staff learned he`s gay, according to KCPQ Seattle-Tacoma.

18-year-old Jase Taylor said he was hired by the Firs to be a camp counselor at their Fir Creek Day Camp. But before he could start his job, he was terminated because management at the Fir Creek Organization found out he is gay.

He said he was especially hurt because he grew up with this faith-based group.

“I feel kind of betrayed,” said Taylor. “I feel like they loved and accepted me for so long, and now just to have this erupt ‘you can’t work for us because of who you are” is confusing and frustrating.”

The Firs has confirmed Taylor was fired because of his sexual orientation. Taylor was not at today’s protest.

His family released a statement saying they were supportive of the efforts.

Here’s what they had to say.

“In the end, I would really like to see their minds change,” said one protester. “I don’t know if they will come around this year, but there is an opportunity for them to have discussions with other organizations, and other Christian organizations as well around this area, and in Washington in general, who have been inclusive.”

A group called the Opportunity Council has announced it is terminating it’s more than 25-year long kitchen lease with the Firs. “The Firs recent personnel actions are not compatible with our agency’s values.

See above video for the full story by clicking the arrow.